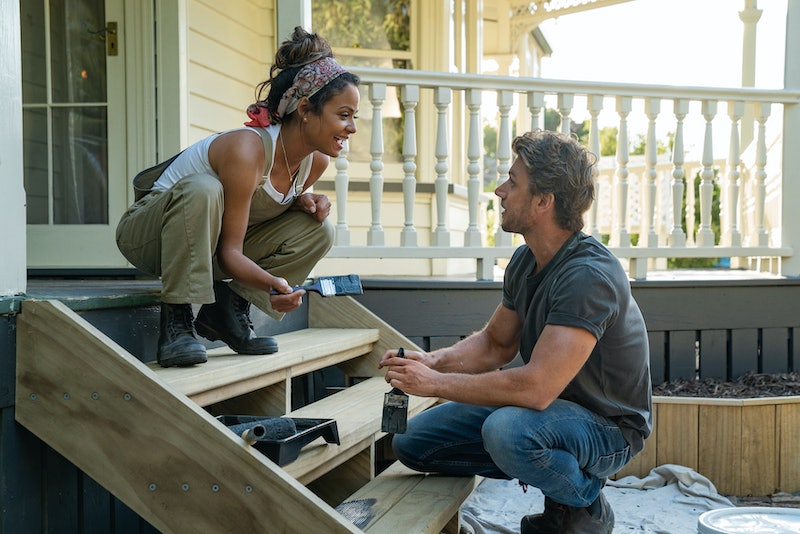 Netflix's upcoming rom-com romp Falling Inn Love looks to be about as cheesy as anybody might expect, and that's OK! Premiering on the streaming platform Aug. 29, it features Christina Milian as Gabriela, a recently-fired and recently-dumped exec from San Francisco who lucks into a New Zealand inn thanks to an internet contest. Unfortunately, the inn is in shambles and starting renovations means working with Jake (Adam Demos), a local renovator who is, of course, wildly attractive. Romantic sparks obviously ignite. Unfortunately we can't tell you that Falling Inn Love is based on a true story about a real odd couple coming together over a bed and breakfast.

Well, there's no story quite like it that's publicly accessible, at least. There's no way to check every romantic relationship ever formed in the world, after all, so who knows? Odds are that there might very well be a relationship out there that was founded on some very similar pretenses. But as far as widely-known, reported stories, there's unfortunately not a whole lot to go on.

Of course, the fact that Falling Inn Love isn't based on a true story doesn't detract from its charm. It still is a romantic comedy, after all, and one that features some pretty delightful, well-paired leads to boot. Speaking with People about her pairing with Demos, Milian said, "We have impeccable chemistry. You just can't resist the chemistry between Adam and I." That chemistry certainly shines throughout that interview, and the trailer absolutely teems with friendliness and familiarity.

What's more, if the trailer is any indication, audiences can expect to see whole lot of good classic rom-com tropes. There's "The Look," where one of our attractive protagonists just gazes at their romantic interest, the "Accidentally Seeing Them With a Shirt Off" and the "Falling On Top of Someone Else," which are each exactly what they say on their tins, and even more.

With all that being said, however, there's still actually one small bit of reality presented in the story, namely its whole "win an inn" conceit.

There have been more than a few contests and sweepstakes involving a retiring owner of some property — usually a home, book store, or, as is the case in Falling Inn Love, a bed and breakfast — looking to hand off their business to somebody they feel will treat it with the right kind of respect and love they had given it. The Boston Globe reported one example where Janice Sage, the former owner of the Center Lovell Inn in Maine, gave away her inn after hosting an essay contest in 2015. Sage herself had won the inn during another essay contest back in 1993. The winner, Prince Adams, still runs the inn today alongside his wife Rose, and though their pairing might seem to parallel nicely with Falling Inn Love, it doesn't quite match up, as they were together before winning the Center Lovell Inn.

So even though there hasn't been a real-life romantic pairing quite like Falling Inn Love just yet, don't lose hope. There's a whole wide world of possibilities out there, and if romantic comedies have taught the world anything, it's that love can happen anywhere at any time — even amidst unlikely sweepstakes... I mean, circumstances.

More like this
Netflix Settles With Mo'Nique After She Sued For Racial & Gender Discrimination
By Jake Viswanath
15 Romantic Movies On Netflix That Are Perfect For Snuggling Up On The Couch
By Rachel Simon and Grace Wehniainen
What’s New On Netflix: The Return Of 'The Umbrella Academy'
By Arya Roshanian
15 Intriguing Movies On Netflix That Are Based On True Events
By Mary Kate McGrath, Shannon Barbour and Grace Wehniainen
Get Even More From Bustle — Sign Up For The Newsletter