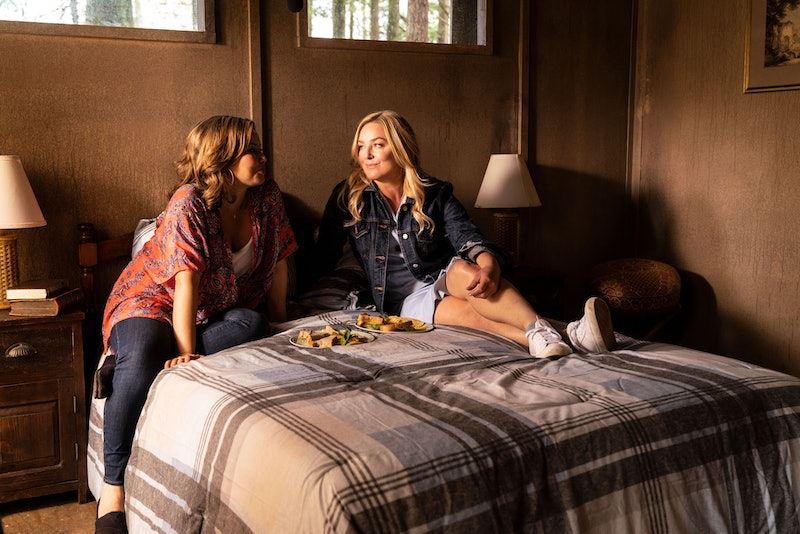 This summer, Lifetime is adapting several popular books for the small screen thanks to their Lifetime Movie Book Club. That includes Family Pictures, which is not based on a true story, but Jane Green's novel of the same name. The book was released in 2013, and the plot sounds like the perfect fit for a Lifetime flick.

According to the book's GoodReads description, it follows two 40-something women living on opposite sides of the United States who are both confronting similar crossroads: their children are about to leave home for college, their husbands travel more than they would like, and they're feeling a general emptiness. When a shocking secret is exposed, their lives become directly intertwined, and they're forced to figure out whether or not they can "learn to forgive."

Based on Family Picture's synopsis, it sounds like the Lifetime movie will stay pretty faithful to the book. It follows Sylvie and Maggie, whose daughters befriend each other on a college tour — only to discover a bombshell secret that shakes up both families. The Family Pictures trailer reveals a little too much about the story, including the actual secret, which fans of the novel and anyone who can piece together a plot probably already knew anyway. In it, Grace and her friend arrive at her house to greet her parents. Her father Mark suspiciously hides, and it doesn't take long for Grace’s friend to realize that he's actually her dad too. She shows Grace and her mom, Maggie, a photo of Mark on her phone, and the revelation throws everyone for a loop.

Maggie is understandably angry and calls Sylvie to confirm that they are both married to the same man. Well, that explains why he is always traveling so much. Sylvia comes out to visit Maggie and is surprised to see the lavish life she is leading, while Maggie is shocked that her husband's other wife is pretty. The women initially argue, leading to Maggie losing her home somehow, but they eventually come together to fight the common enemy: Mark.

In comparison to other Lifetime films, this one actually doesn't sound too far-fetched, especially when you consider similar real-life cases. For example, Army Sargent Scott Fuller married Rachel Lee while stationed in South Korea, but Lee later alleged that Fuller already had a wife and children in the U.S., The New York Post reported. According to the outlet, Fuller claimed he and his previous wife had divorced, and he could not be reached for comment on the story. The Post further reports that Fuller was convicted in a Korean trial court and sentenced to eight months in prison, but ultimately wasn't prosecuted. Instead, he was re-stationed in America in Fort Drum, New York.

With that in mind, Family Pictures easily could have been inspired by real headlines, but fortunately it's pure fiction, so you can sit back and enjoy the drama. Find out how Sylvie and Maggie get back at Mark when Family Pictures premieres June 29.