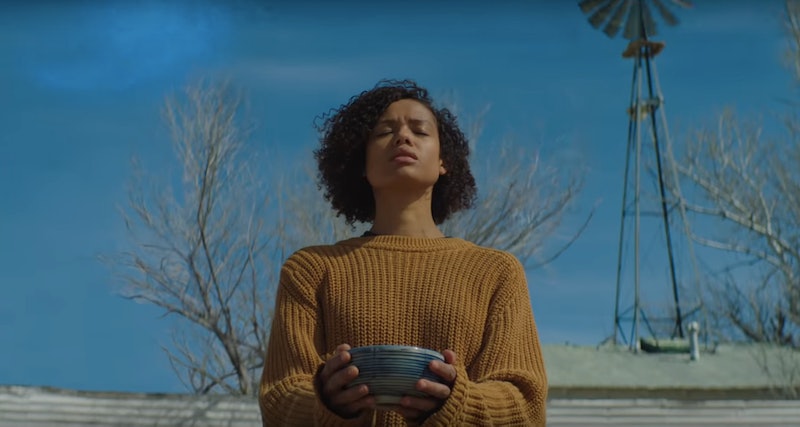 Most superhero movies are based on some sort of source material. So it makes sense to wonder whether the new movie Fast Color could be based on an existing comic, graphic novel, or book, even though it's not your typical superhero film. But the reason that the movie feels so new and different is because the story itself is new and different. Fast Color is an original idea from director-writer Julia Hart, who co-wrote the film with her husband Jordan Horowitz.

Hart was inspired by her own new motherhood when she came up with the idea for a superhero who was also a mother, which was something she'd never seen before.

"When we became parents, I, in particular, felt the strongest I'd ever felt," Hart explains via phone prior to Fast Color's release. "That whole thing about the adrenaline of parenthood would make you able to lift up a car if your child's underneath it — I mean, I thankfully never had to actually do that — but I felt that I could, for the first time in my life, just be and kind of do anything in a superhuman way."

Hart and Horowitz also wanted to have their superhero be a woman who was creating things, rather than a man who had to cause destruction while saving the world, which is typically how things go in the MCU and DCEU. In Fast Color, the main character, Ruth (Gugu Mbatha-Raw) doesn't crash into buildings while fighting supervillains, but she does battle her own demons and — without spoiling anything — has an effect on a world that's experiencing an eight-year drought.

And when it comes to that world, Hart didn't go full post-apocalyptic for a reason. "I think that when those [post-apocalyptic film] worlds look so super different from our world it's almost less scary because, 'Oh, well, that world is so completely different from ours, that won't happen to us.' So, I was really interested in the idea of a pre-apocalyptic world where everything kind of felt and looked like it was maybe just eight years in the future," Hart explains. "That was really fun to explore a world just beyond the one that were in now. Like, if we don't get our act together and we don't change things that kind of stuff could become a reality."

The film also explores addiction and mother-daughter relationships, which Hart wanted to feel authentic. For her, it's the characters that should be the focus of the film; the fact that they have special abilities and live in a world suffering through a climate disaster is just part of their story.

"People might not be suffering from the physical manifestation of their superhuman abilities," Hart says, "but we're all dealing with something and we're all trying to find ways to take care of ourselves and heal ourselves and get better."

Hart hopes the film makes people think more about the climate and what we're leaving behind for future generations, among other things. No matter what audiences leave with, though, there's no denying that Fast Color viewers will be seeing something brand new.