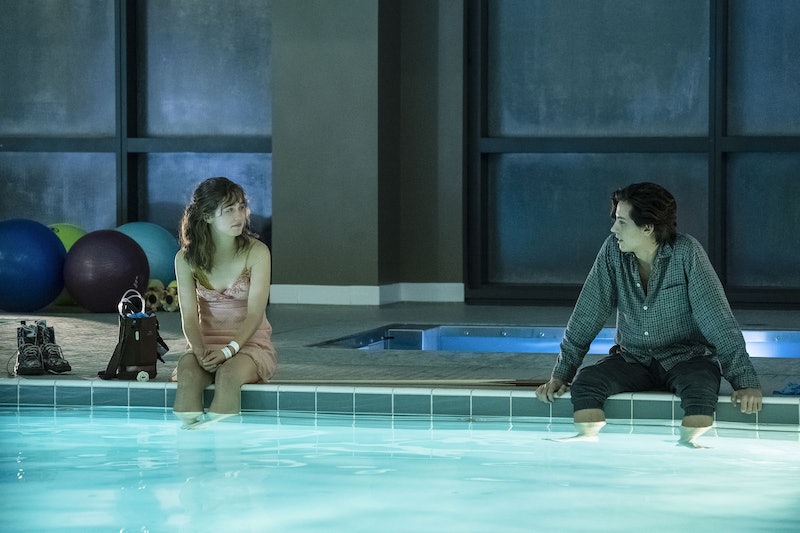 Five Feet Apart, out Mar. 15, tells the story of two teens, Stella (Haley Lu Richardson) and Will (Cole Sprouse), who have cystic fibrosis and fall in love during treatment. They’re forced to keep six feet apart from each other to avoid cross-infection, but find a way to develop a relationship without relying on physical touch. This touching drama is unlike any other, but is Five Feet Apart based on a true story?

It’s actually not. But it is inspired by conversations director Justin Baldoni had with the late YouTuber Claire Wineland, who had CF and appeared in Baldoni's CW documentary series My Last Days, which followed six people facing terminal illness who strived to make a positive impact before their passing.

"She became like a little sister to me [after filming My Last Days]," Baldoni explains over the phone ahead of the film's premiere. "It was after my experience with her — I just fell in love with who she was, and how she lived her life, and how she constantly chose joy and really wanted to live. And the thought that life can be made into a beautiful piece of art regardless of your circumstances, that really made me feel curious about this illness in the first place."

So Baldoni dug a little deeper, and Wineland's candor inspired the germ of an idea that would become Five Feet Apart.

"It was through that conversation where I asked her, 'Alright, give me the inside scoop, what happens in these hospitals? What happens when you're 16 and have CF? Have you ever dated someone else with CF?'" he recalls. "And she was the one that told me that that is so bad and looked down on and dangerous, because there's something called cross-infection, and that's why people with CF can't be closer than six feet because they can contaminate each other with their unique bacteria."

According to the Cystic Fibrosis Foundation, CF is "a progressive, genetic disease that causes persistent lung infections and limits the ability to breathe over time." Cystic Fibrosis News Today explains that the reason why people with the disease can't be around each other is because "people with CF are susceptible to infections and bugs which live in the lungs and because no two patients are exactly the same, they will be more likely to develop some infections over others. Two cystic fibrosis patients meeting each other in person will increase the risk of each one developing infections from the different bugs in each other’s lungs."

For the director, hearing about this danger was eye-opening, and he decided to make an uplifting film that would capture how these characters live life to the fullest, while also showing what it's like to live with a disease that not many know the specifics of. And to make sure it'd be accurate to viewers with CF, Baldoni brought on Wineland as a consultant for the film.

In her position, Wineland gave plenty of feedback to Baldoni and the film's writers, Tobias Iaconis and Mikki Daughtry. "We would constantly go back and forth and she was like, 'I don't know, I don't know about this,' or 'I love this,' and 'What about this?' There was a lot of the movie that was inspired by stories that she told, and she was too sick unfortunately to come to where we were shooting, and had her lung transplant while I was editing the film," says the director.

Wineland died of complications from the transplant, per CNN, and never had a chance to see the final film. But Baldoni notes that even though she didn't get to see the movie, she was immensely excited about a movie about CF finally being made. "I sent her pictures of the sets, and she freaked out and said, 'Oh my god, it's so real!,'" recalls Baldoni. "She was a big supporter and a champion."

In addition to Wineland's help, the filmmaker also enlisted the expertise of medical professionals to help provide the cast and crew with the information they would need.

"We had the assistance of medical professionals who had been trained with cystic fibrosis for years, and we had also worked closely with patients to get ourselves into the psychological headspace of that, and the physical limitations of cystic fibrosis," says Sprouse in a separate phone call. "We had prepared for five, six weeks ahead of time, and thankfully we had the script for long enough that it had allowed me to do my own personal research. And Justin had given us the resources to talk to a web of people that would give us advice, and guide us through the details of treatments and all that to really allow us to portray as hopefully accurate a performance as we tried to."

As a YouTuber, Wineland became the most prominent millennial figure living with CF, giving a humorous, realistic glimpse at what it's like to have the disease. With her participation, Five Feet Apart captures the same hopeful essence of her beloved videos, educating a wider audience about what she went through.