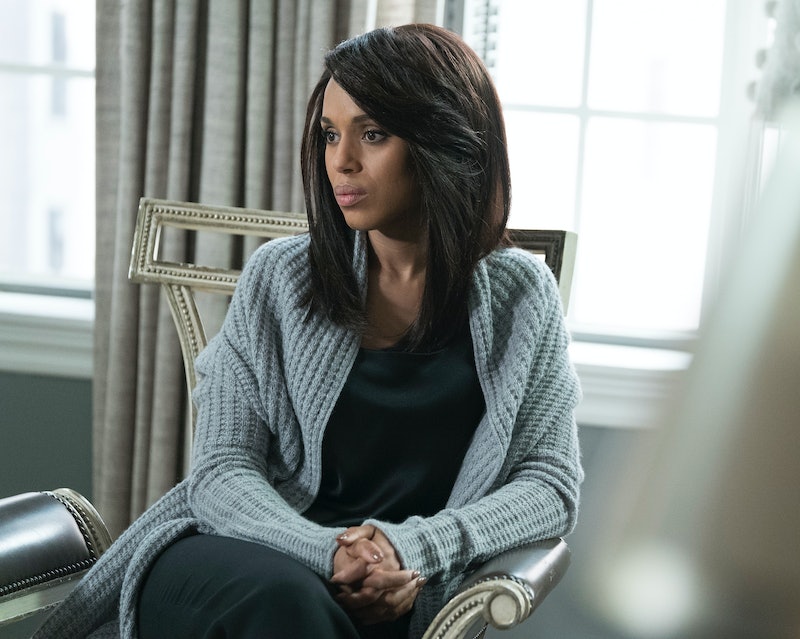 The moment that Kerry Washington graced our screens as the indelible political fixer Olivia Pope on Scandal six years ago, it was clear that television as we know it would change. Washington, whose portrayal as Pope made her the first Black woman to star in a primetime network drama in 40 years, crafted a character that escaped the stereotypes that Black women are frequently subjected to.

Olivia was strong-willed, not rude. She was authoritative, not demanding. And most importantly, she was the nucleus of Scandal instead of someone who was relegated to the sidelines. When viewers tuned in to watch the show, they were essentially already in Olivia's corner, and that’s a coup for representation in and of itself. But as with any fully realized character, her flaws were revealed throughout each season, which ultimately culminated in the “protagonist” that we’re left with by the show's end.

On the precipice of the Scandal series finale, Olivia Pope has become unsympathetic, and has no chance of receiving her happy ending — or what she referred to as “standing in the sun.” Olivia’s trajectory is vital though; her imperfections remind us that leading figures aren’t a monolith and that their complex natures only work to strengthen the case for more diversity on television.

From the very beginning of the series, Olivia is not only painted as Scandal's central character but as the sole moral compass of her crisis management firm, Olivia Pope and Associates. Liv's character was based on George H.W. Bush administration press aide Judy Smith, who also served as the show's co-executive producer. As a professional fixer, Olivia was known for following her instincts and taking on cases based on what her gut told her. Her team, who referred to themselves as gladiators, was comprised of people she saved in one way or another; they followed Liv's lead on navigating the corruption that runs rampant in Washington.

The white hat she wore — which was first metaphorical, then became literal — was a reminder of not only her objectivity, but her integrity. She never opted to get her hands dirty unless she absolutely had to. But as her romantic entanglement with President Fitzgerald Grant (Tony Goldwyn) unraveled as Scandal ran its course, it became evident that Olivia was no one's hero — no matter how much she wanted to be.

The true legacy of Scandal doesn't lie in political accolades, but in the duality of Olivia Pope.

Despite the larger historical implications of her affair with Fitz (once during an argument with Fitz, Olivia quipped, "I'm feeling a little, I don't know, Sally Hemings-Thomas Jefferson about all this"), Olivia relished in her role as mistress to the president. But Fitz turned out to be her biggest weakness and the person for whom Liv's ethics were routinely compromised. It wasn’t just physical chemistry that kept her coming back to him — it was her proximity to power. Olivia vowed to protect her access to it at all costs, and in the process, she further solidified her role as Scandal's antihero. She used her resources to quiet one of Fitz's other mistresses, rigged an election to secure his presidency, and kept sleeping with him despite being publicly outed as the other woman. Even Fitz's wife Mellie (Bellamy Young) giving birth to their third child didn't stop Liv and Fitz from seeing each other. There was no allegiance to Olivia's famous “white hat” mentality in these instances — only lust and greed. Clearly, Olivia had come a long way since the days when her moral compass seemed to direct her towards justice.

When Olivia was kidnapped in Season 4 and put up for auction on the black market in a cringeworthy storyline, it was because she was a pawn used in a political scheme to force Fitz to go to war. Even with this serving as her lowest moment in the entire series, we are reminded that Liv is not a victim of circumstance — she is an orchestrator of her fate. And as her list of enemies grew and the bodies continued to pile up, it became even clearer that morality is irrelevant to Olivia when it comes to extracting vengeance.

As she descended upon the White House — first as Fitz's live-in girlfriend then maneuvering her way to become Mellie's chief of staff by Scandal's final season — Olivia continued to choose power and influence over honor and justice. This led to even more (sometimes literal) blood on her hands: she forced Vice President Luna Vargas (Tessie Santiago) to commit suicide, and assassinated Bashran President Farid Rashad (Faran Tahir).

While Olivia and her team (who proclaim that they would still follow Liv "over a cliff") find themselves in the series finale confessing to their sins to prevent Mellie's legacy as the first female president from being tarnished, however Scandal ends tomorrow night, that won’t be the show’s true legacy. The true legacy of Scandal doesn't lie in political accolades, but in the duality of Olivia Pope and how things won't end positively for her. And quite frankly, she doesn't need them to, since representation — especially when it comes to how Black women are portrayed on television — needs to contain layers in order to be progressive.

What was so vital and refreshing about Olivia Pope was not only her confident and captivating nature, but her unpredictability. She exercised questionable judgment more often than not and did things that surprised even her. Cloaking a main character in moral piety and having them fall short can be a dangerous and sometimes unrealistic move. It works well for Liv because it reminds us of her humanity and that Black women don't have to incessantly hold up the people around them in order to be considered valuable. She won't be “standing in the sun” by the show's end, nor does she expect to — that's simply the price of being Olivia Pope.