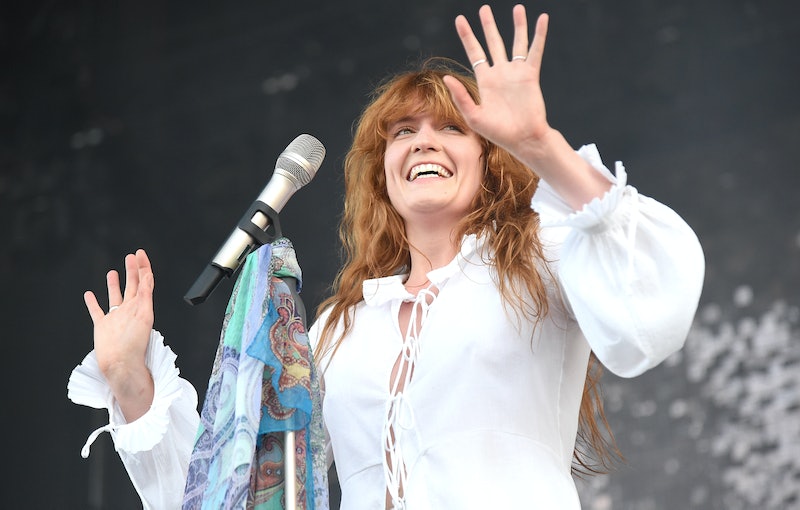 Lead singer of Florence And The Machine Florence Welch is one of the most successful British artists of recent times. The front woman is a lot more than a killer vocalist and performer, she also writes the songs that have made the band famous throughout the world. (And potentially universe, because, if aliens exist, I am sure they love to boogie to Hunger as much as us.) So, with all this famous and success going on, the question is, has the singer found time to date? Is Florence Welch married? Loved up? Single and ready to mingle? Flying solo and loving life? Let's find out.

I'll jump straight to the point and say no, Welch is not married. As the Sun reports, the singer has previously been linked to The Maccabees' Felix White and James Nesbitt (most famous for his role on Cold Feet), but right now it appears she is focusing on other things — like her epic music career.

The star has had a meteoric rise to the top of the industry in what seems like a relatively short time. The songs that first caught the attention of the world were the smash hits Cosmic Love and Dog Days Are Over.

Welch has used her success for good in many ways. And I am not talking about her amazing wardrobe, which has always been drool worthy. Nope, not only has Welch been a proud supporter of LGBTQIA+ rights, she has also been very open about her struggles with depression, anxiety, and alcoholism. The singer has also been vocal about the deep and dull feeling of loneliness that she has felt throughout her life. This led her to get "always lonely" tattooed in block letters on her arm. In an interview with the New York Times, she shared her reasoning behind the inking:

"I thought that I would just cement it, because maybe if I just had it on there, I could own it somehow, make it a part of myself, or embrace that part that I find difficult."

Welch's latest album also tackles something she has never discussed before: her previous issues with eating disorders. The song Hunger which appears on Florence And The Machine's fourth album, High As Hope, begins with: "At 17 I began to starve myself, I thought that love was a kind of emptiness". Speaking to the New York Times about her decision to share her experience through her music, Welch said:

"I never thought I would talk about it, I didn’t really talk about it with my mom until really recently. So to put it in a song — it’s like, what am I doing?"

She went on to explain that the whole experience was somewhat therapeutic. “It definitely was a release for me,” she told the newspaper. “The songs sometimes have more clarity in them than I do about my life.”

Welch and her band have been given huge props over the years, being recognised not only by critics and fans, but also receiving a shed load of awards along the way, including the Ivor Novello award for International Achievement and the Critic's Choice award at the BRITs back in 2009.

A decade on and Welch is still at the top of her game, having been nominated for not one but two awards at the 2019 BRITs. The singer is up for British Female Solo Artist as well as the much coveted Mastercard British Album Of The Year award.