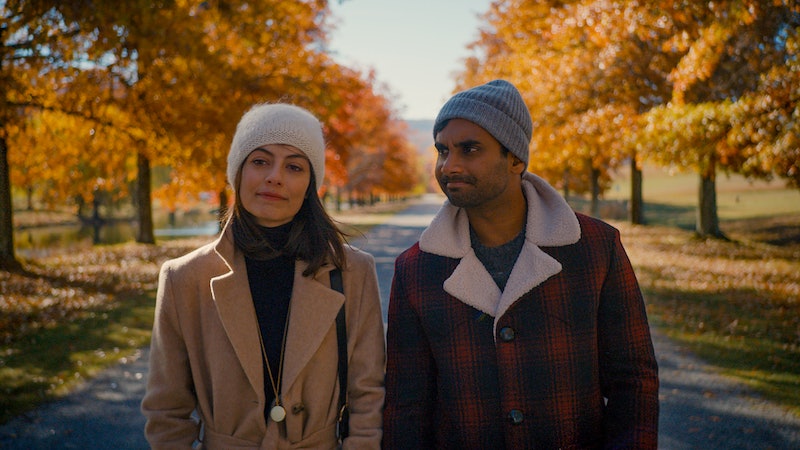 It's clear from the trailer for Master Of None Season 2 that Aziz Ansari's character Dev is going through some changes. Spoilers ahead for Season 2. After leaving New York and his ex-girlfriend Rachel behind, Dev is kicking it in Italy making friends, pasta, and dates. It's clear he's once again back on the dating scene, trying to find "the one." There's one particular woman, though, who seems to be on Dev's mind throughout the season. That would be Dev's new Italian friend Francesca (Alessandra Mastronardi), who is the granddaughter of the woman teaching him how to make pasta in Modena, Italy. She's also the woman in the shadows in the Master Of None Season 2 trailer. But, is Francesca Dev's new girlfriend? Turns out, the answer to that question isn't as easy as you may think.

Francesca is first introduced as Dev's new friend in the Season 2 premiere "The Thief." The two clearly have good repartee — their joke about "me time" is adorable — but she's got a boyfriend named Pino who she's been dating for a decade. It's not until Francesca comes to New York to visit Dev that there's a hint of something more than a friendship — a flirtation that others seem to notice, even if Dev is trying to ignore it.

Dev's feeling become too obvious, though, once he learns that Francesca and Pino are engaged. When she tells him over Skype, flashing her engagement ring, you can see Dev's face drop as if it's the first time he realizes that he has feelings for her that will never be reciprocated. This just so happens to be the theme of Master Of None Season 2. “Season one is about not knowing what you want," Ansari told Vogue. "Season two is about wanting what you can’t have."

At least, Dev thinks he can't have Francesca, who returns to New York City with her fiancé with news that things aren't as happy as she made them seem. Things feel different now that they're engaged, or perhaps she's feeling that they're too much of the same, being that in her adult life she's never been with anyone else besides Pino. It's clear the relationship she has with Dev is part of the problem. It's new and exciting; the two get along so well and love hanging out with one another. If things were different they could be together, but for now, they're star-crossed lovers.

Francesca and Dev's will-they-or-won't-they situation is the main focus of the latter half of the season when they both admit that they're more than friends. Francesca is unsure of what to do, since breaking up with Pino and being with Dev would completely upend life as she knows it. Dev understands this, but asks the question anyone getting married should ask themselves: Are you willing to settle for something that you're not sure you want because it's the easier choice?

After a regretful kiss the two share in Dev's apartment, Francesca leaves and it seems as if she'll be gone for good. Dev is, once again, left by the woman he loves for something else. Last time, Rachel left him for Japan, the place she always dreamed of going. And now, Francesca leaves for her future husband. It's why when Francesca shows up in Dev's bed in the final shot of the Season 2 finale, it's unclear what the status of their relationship is. Let's just say, it's complicated and we'll have to wait until Season 3 for answers.