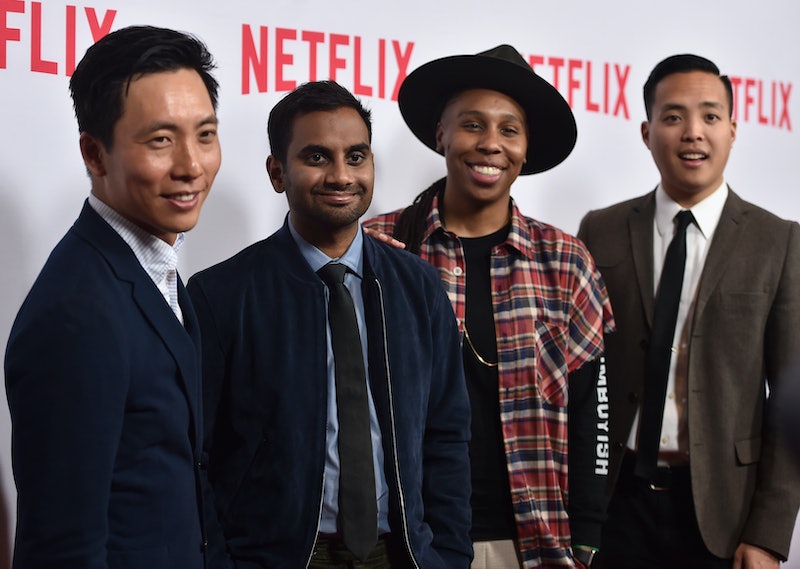 When you’re as curious as Dev Shah and his crew of New Yorkers, the possibilities for exploration are endless. In Season 1 of Netflix’s Master of None , we saw the brainpower of Aziz Ansari and his hardworking team challenge ideas of masculinity, parenthood and commitment, just to name a few. Luckily, Season 2 is on its way, and Bustle caught the cast (who are also writers on the show) at just the right time. Yep, Ansari and his team are just gearing up to create the next season, ready to make us question more about society and, of course, what the hell we’re all doing with our lives.

The new comedy series is inspired by real events and emotions experienced by Ansari and his friends, and no one — including its home, Netflix — can get enough. Seriously, the streaming network doesn’t even know what Ansari and his co-writers have planned yet, at least according to co-creator/writer Alan Yang. But worry not: “These guys got some stuff up their sleeve,” says Lena Waithe, who plays Dev’s sidekick Denise. “They got some good topics, I’m excited to jump back in,” she tells Bustle. OK, OK, I know they’re not going to give up any specifics on what they have planned so far, only I couldn’t help but ask what they hope to see when the series returns in 2017. A girl can dream, right?

If you find this as extremely exciting and interesting as I do, please raise a hand.

As important as it is to explore romantic relationships on the show, Waithe explains how other types of relationships should get to share the spotlight as well next season. “What happens when friends grow out of each other or evolve? When a relationship dissipates,” the 32-year-old says. “Because I think that’s a thing that happens with us when you’re deeper into your thirties. So that could be interesting.”

Kelvin Yu, who plays Dev’s easygoing sidekick Brian, has an idea that's sort of out of left field, and I’m so here for it. “Alan [Yang] is a huge sports fan,” he says. “He is like a walking encyclopedia. We should get some sports in there, it would be really interesting if Brian was a smilier type of person.” Even if Brian doesn’t become a testosterone-infused sports nut, Yu still looks forward to any changes the next season may have. “You have to see it evolve,” the 37-year-old says. “You can’t just run it back.”

As for the man himself? Believe it or not, Ansari is feeling pretty “scared” right about now. “Ugh, I don’t know. I’m scared ‘cause there was so much love for Season 1, I feel like no matter what we do it’ll be like a disappointment,” the 33-year-old says, laughing. “No, I think it’ll be good. We’re trying some really ambitious stuff and I hope we pull it off. I think we’re trying to challenge ourselves to beat what we did in Season 1,” he says. “Now that we know the show a little bit I think that helps so we can do even more exciting things hopefully. Hopefully it all works out.”

How will it not? Ansari plays modest, but he is putting a lot of labor into his baby, and it goes on behind-the-scenes. “We would come in for like a scene or two for half a day, he’s been up since 4 AM working on a draft,” says Waithe. “When we come in he wants to run lines, he directed an episode. Crazy town. He really is a person that’s dedicated to the show and wants to make sure it’s honest and funny,” she explains. “He got all these accolades, write-ups, but for him it’s not even about that. He just wants people to watch it, that’s the most important thing.”

And watch we will. Throughout all of the excitement and even feeling “scared,” all of the love and positive response received from fans has not gone unnoticed by Ansari.

“[When] you make something like that and work on it forever, you hope people like it,” he tells Bustle. “We were really overwhelmed with the support we got. It was really nice, very flattering. We’re really happy with it.”

Best believe that whatever comes of Season 2, Ansari and his crew will aim to please.