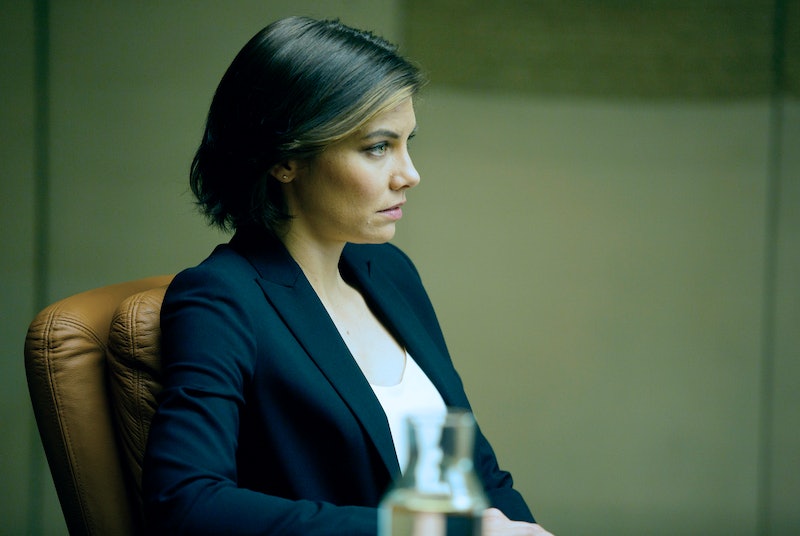 Lauren Cohan (The Walking Dead’s Maggie Rhee) may make a pretty convincing CIA agent, but her Whiskey Cavalier character, Frankie Trowbridge, isn't based on a real person. Surely, there are some women like her in the real CIA, but the job kind of requires that you don't publicly air out your identity. So instead, Cohan is making the role her own.

According to Whiskey Cavalier’s website, the series follows Will Chase (codename: Whiskey Cavalier), an FBI agent who is fresh off of a painful breakup when he is assigned to work with Frankie, a CIA operative. Together, they're tasked with leading a team of spies to save the world via covert operations. Chasing down bad guys naturally lends itself to a lot of high-thrill action, but just as in similarly themed shows like Criminal Minds, Whiskey Cavalier also follows the team's friendships, romances, and office politics.

As her Fiery Tribune codename suggests, Frankie is an unpredictable and unstoppable force that pushes Will out of his comfort zone. Of course, there's the possibility that Frankie will fall in love with Will because that's how TV works. For now, though, they're serving as two equally matched — but opposing — partners, and their frenemy dynamic is what fuels much of the story.

The roles aren't that far of a stretch for either actor considering Foley’s prior role as a B613 agent and Cohan’s as an apocalypse badass. They are quite comfortable with fighting deadly foes, wielding weapons, and crafting complicated plans in the face of danger. Interestingly, Cohan's fellow Walking Dead alum Tyler James Williams, who played Noah, will be by her side once again as Edgar Standish, so it's an exciting reunion for fans.

Cohan recently spoke with ET about Frankie's unique personality and her connection to Will. "She really is the most mission-oriented person on the team," she said. "Frankie and Will's dynamic is Mr. and Mrs. Bond. They're just designed to infuriate each other." She also called the show "a romantic comedy wrapped up in a spy drama," which seems to be fitting based on its humorous yet action-packed official trailer. The mutual good looks and chemistry between this duo will undoubtedly have fans shipping them as they tackle tough cases, argue over how to approach situations, and basically get on each other's nerves, but as any TV fans know, they won't be getting together any time soon — if at all. Everyone loves a good will-they, won't they storyline.

Hopefully, the show will touch on Frankie's background and how she got to this point. Where is she from and how did she wind up in the CIA? What was her life like before joining? Did they recruit her, or was this something she actively pursued? It will also be interested to see who she is outside of the job. But regardless of what answers the series does or doesn't bring about her backstory, she's exactly the kind of boss female character that TV needs right now.