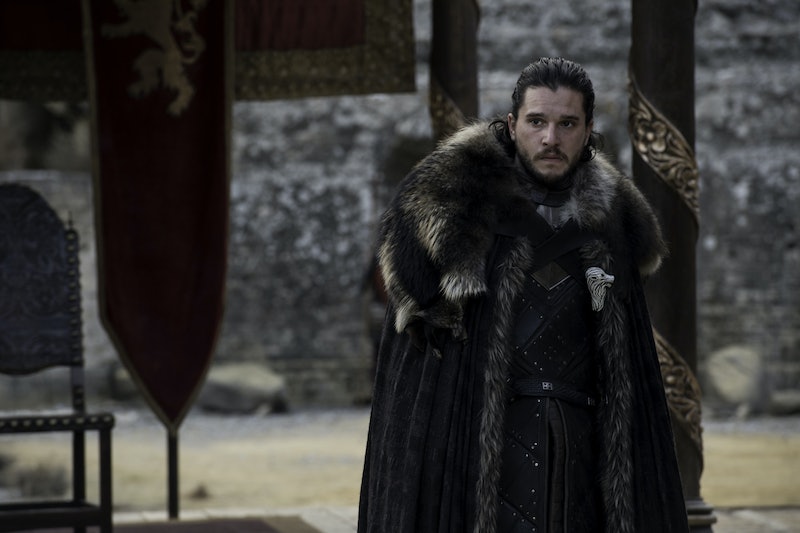 If you thought Season 7 of Game of Thrones was chock-full of epic reunions, that's nothing compared to what the show's eighth and final season has in store. According to visual effects supervisor Joe Bauer, Jon Snow's loyal and beloved direwolf, Ghost will be returning to Game of Thrones in the upcoming season, and given that fans haven't seen the white-furred canine since Season 6, it's definitely worth getting excited about.

"Oh, you'll see him again. He has a fair amount of screen time in season eight," Bauer said during a recent interview with The Huffington Post. "He's very present and does some pretty cool things in season eight." Bauer, of course, was unable to go into any specific detail on the matter, but it's comforting to know that, regardless of all the death and destruction that's sure to unfold throughout Season 8, at the very least there will be one good thing to look forward to. Hopefully, Ghost's return will include a reunion with Jon, who has yet to find out about his complicated family lineage, so he's going to need all the support he can get. And honestly, who better to give it to him than his furry BFF?

At this point, Ghost is one of the two remaining direwolves that are still alive. Last year, Arya encountered her long-lost four-legged companion Nymeria, who she sent off into the woods back in Season 1 in order to save her from Cersei and Joffrey's wrath. Their reunion was short-lived, but it at least confirmed that she (much like Arya) was surviving during these dire times in Westeros. As for the others, Sansa's direwolf, Lady, was the one who ended up paying for Nymeria's crime of biting Joffrey, and was sentenced to death. (Ned offered to do the deed himself in order to make sure it was as painless as possible.) Then there was Robb's direwolf, Grey Wind, who was killed on the same night as the Red Wedding. Bran's direwolf, Summer, met her end trying to protect him from the White Walkers beyond the wall, and Rickon's direwolf, Shaggydog, was beheaded at some point during Rickon's capture by Smalljon Umber.

Suffice it to say, these animals have had a rough go of it throughout the course of the series, so the knowledge that we'll get to see Ghost once again is both exciting and worrisome all at the same time. Will Ghost return only to lose his life during some heroic act? Given this show's history, it's definitely a possibility.

Ever since they first met, Ghost has remained by Jon's side, even venturing with him to the Wall when he joined the Night's Watch. He's served as Jon's protector and ally in a way no human has. (He even provided a clue about Jon's resurrection, sensing his presence a few moments before his formerly dead body took in a deep breath of air.) But given the bloodshed that's to come — whether it be by the hand of Cersei or the Night's King — there's a good chance Ghost's fate will end in heartache. Then again, maybe Game of Thrones will surprise us and give Ghost an ending worthy of such a loyal pup. Wouldn't that just be the greatest twist of all?