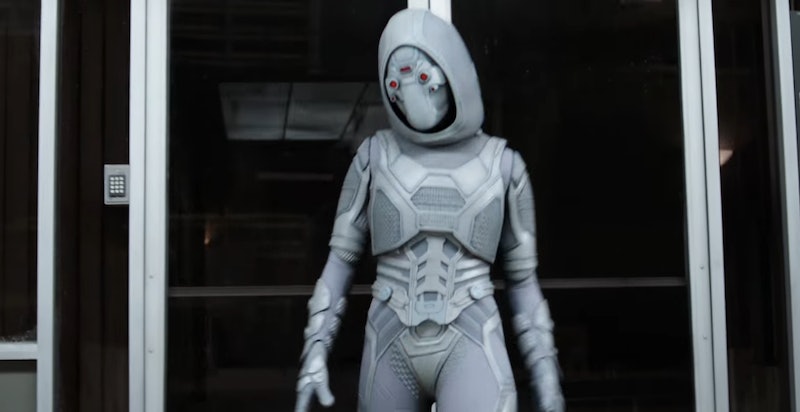 In the sequel to 2015's Ant-Man, the new film Ant-Man and the Wasp, the villain is Ghost, aka Ava. But if you look for Ghost in any Marvel comics with Ant-Man, you won't find her, and the reason is two-pronged. First, Ghost originates in comics about Iron Man. And second, even if you look to the Iron Man comics (or to the Thunderbolts comics, where Ghost is also included), you won't see the name Ava, because Ghost is a man, whose alter ego remains nameless. Yep, not only does Ant-Man and the Wasp give a name to Ghost and solve other mysteries about the character, it also gender-swaps the role, a great but surprising move since gender was one of the few things fans did know about Ghost.

Yet in actuality, the decision to make Ghost a woman happened because so little is known about the character. "The Ghost character could be male, female, anything, so it just seemed more interesting to us [to cast a woman]," Ant-Man and the Wasp director Peyton Reed told Entertainment Weekly.

In the film, Ghost is played by English actor Hannah John-Kamen (Ready Player One, Black Mirror). During a set visit in the summer of 2017, John-Kamen had to keep tight-lipped about her role when speaking to journalists, but, as reported by Bustle, she did comment on the fact that she is playing a character who had always been a man in the comics.

"Obviously in this modern way, in the modern world, changing it up and having a female character is really, really cool and definitely forward thinking," John-Kamen said. "You look at graphic novels, you look at comic books written so long ago, and they’re like 50 years old or 40 years old. And it’s nice to go, 'Do you know what? This is a modern world.' It’s freeing to be able to take that character and go, 'Yeah, that can be played by a male or female.' That’s definitely forward thinking and that’s been amazing to be able to do."

In addition to Ghost now being a woman, another major way the movie version is different from the original is, as mentioned above, that in the comics Ghost's debut was as an Iron Man villain. More specifically, Ghost was introduced in Iron Man #219, published in 1987. But, the Marvel Comic Universe is fitting everything together, which means Ghost is being introduced in Ant-Man and the Wasp, and viewers will have to wait and see how it all connects.

Also, it sounds like Ghost's origins are super different in the comics versus in the new movie. In the comics, Ghost created the technology that leads to his invisibility and intangibility. According to Comicsverse, Ghost is one of the Marvel universe's best hackers, "dedicates his life to overthrowing corporate greed," and "is the perfect tool for corporate espionage and obtaining valuable intel."

But, in Ant-Man and the Wasp, Ghost has stolen the technology for her suit and abilities from scientist Hank Pym, the Wasp/Hope van Dyne's father. As Luis (Michael Peña) says in one of the trailers for the movie, "Dr. Pym, I actually heard what happened to you. You opened up the quantum realm. That’s when this crazy, creepy ghost who, like, walks through walls and stuff stole your tech. Now she wants to take over the world or whatever." (Fans can probably assume the "or whatever" will be explained in the movie.)

And then there's the costume, which executive producer Stephen Broussard said is a "pretty classic modernization," according to Coming Soon. "When you think of Ghost you think of the hood," he said. "You think of the white suit and everything like that and Hannah wears it very well. She’s awesome. She’s really, really badass."

Even though the Ant-Man and the Wasp Ghost will have some differences from the one in the comics, overall there was a lot to create and play around with since there was such a small amount of information known about Ghost in the first place. John-Kamen found this "very freeing," according to Collider. "I think with any role it’s always a blank slate to carve anything," the actor said during the summer 2017 set visit. "Whether you’re playing a superhero, a villain, anything from any comic, I think it’s important as an actor to have your own input, interpretation of that anyway. And so it’s been amazing. It’s been so much fun to work with Peyton on that."

On July 6, MCU fans will get to see just how much we get to learn about Ghost, and how John-Kamen makes the character her own.