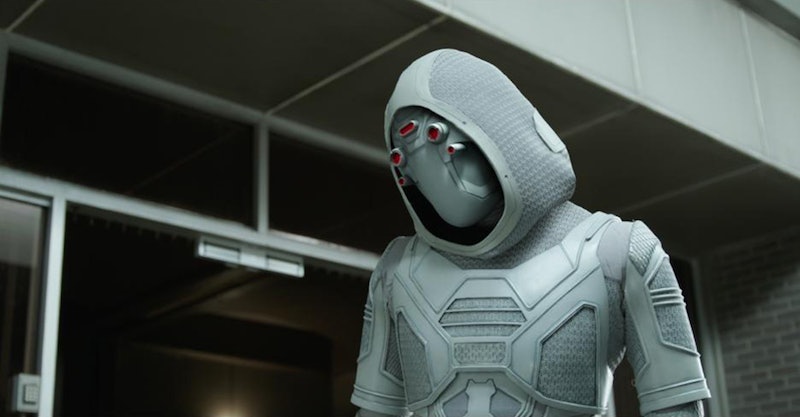 After 31 years of appearances in Marvel comics, the antihero Ghost is finally going to be unmasked. July 6's Ant-Man sequel, Ant-Man and the Wasp, is going to put both a face and a name to the mysterious comic book character whose alter ego has remained totally unknown ever since his first appearance in Iron Man #219 in 1987. But when the identity of Ghost is finally revealed, it may come as a shock to many comic book fans, since Marvel decided to gender-swap Ghost for Ant-Man and the Wasp and make the character female.

As the Wasp filmmakers explain to reporters while on the movie's Atlanta set last summer, they wanted to feature a fresh new perspective on the character. As comics fans know, Ghost is a skilled programmer and engineer who, disenchanted with corporate greed and corruption, builds a suit that makes him invisible, intangible, and stealthy in order to take down large corporations and wreak havoc. In the new film, Ghost will be played by British actor Hannah John-Kamen (Ready Player One, Tomb Raider), who will sport the iconic white battle suit — but still be a total mystery in every other way. Even the character's real name likely won't be revealed.

On set, executive producer Stephen Broussard explains that John-Kamen is "playing a new interpretation of Ghost" with the gender swap, but one who's just as enigmatic as the male comic book figure. "We thought that was a cool opportunity to create a character that was all about mystery and what are the origins and what is the backstory, what are the goals and agendas of this person?" says Broussard. "It was a great vehicle for the kind of the story [we] wanted to tell."

John-Kamen's Ghost in Wasp will have the same "power set" as in the comics and with a "classic" look, only modernized for the film. "When you think of Ghost you think of the hood," Broussard says. "You think of the white suit and Hannah wears it very well. She’s awesome. She’s really, really badass."

Stopping himself before he can reveal too much — "Sorry, I'm trying to police myself here," he says with a laugh — the producer does also let slip that the MCU version of Ghost's storyline will be "very different from what has come before in the comics," saying, "Suffice it to say that she is on a path and she is on a mission at odds with our heroes on this journey. But of a similar goal, of a similar aim at the worst possible time for Scott Lang [Paul Rudd]."

When reporters speak to John-Kamen, she confirms that she is playing a villain, but can't reveal little else besides the gender swap. "She is the antagonist of the movie. She is a she. Because in the original, it's the opposite sex," John-Kamen says. "Obviously in this modern way, in the modern world, changing it up and having a female character is really, really cool and definitely forward thinking."

Getting to put a feminist twist on such an iconic comic book character has been "amazing" for the actor to bring to life. "You look at graphic novels, you look at comic books written so long ago, and they’re like 50 years old or 40 years old," she explains. "And it’s nice to go, 'Do you know what? This is a modern world.' It’s freeing to be able to take that character and go, 'Yeah, that can be played by a male or female.' That’s definitely forward thinking and that’s been amazing to be able to do."

And as for Ghost's fighting style and how her technology-laced suit will come to life onscreen, John-Kamen laughs. "Definitely, uh, ghosty," she says before laughing again. "That’s all I’m gonna give you." For a newcomer to the world of Marvel, the actor is already handling spoilers like a pro.