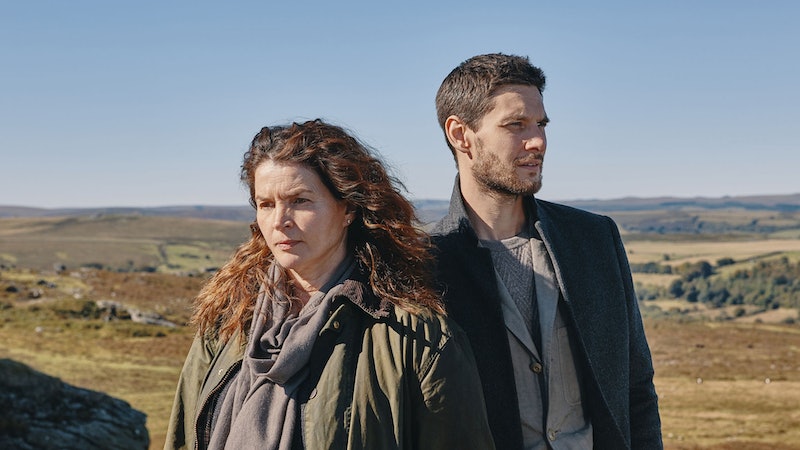 Seeing age gaps in romantic relationships on screen isn't exactly uncommon. However, it's not usually the story of an older woman falling for a younger man. But a new BBC One drama, is doing just that — telling the tale of a woman who brings home a younger man to the objection of her family members. But is Gold Digger based on a true story? The six part series explores a relationship that’s almost seen as taboo and the consequences of taking a risk for love.

Gold Digger stars Julia Ormond and Ben Barnes in the central roles of Julia and Benjamin. Their romance comes is a shock for their friends and Julia’s family, due to the 25-year age gap between them. I reached out to a BBC representative for comment, and they said that Gold Digger isn't based on a true story. However, series writer Marnie Dicken revealed in a statement that she has drawn inspiration from real life themes in creating the thriller. She said, “we are so used to seeing older men with younger women in film and television, and indeed in politics and real life, it’s barely commented on, however yawning the age gap. Yet flip the genders and suddenly it’s a discussion point. As if it’s impossible to understand why a younger man might be attracted to an older woman without having some other motive."

She continued: "Gold Digger explores this taboo. By getting under the skin of each character, understanding why they either reject or accept the romance, hopefully the audience will feel they’ve been shown multiple viewpoints and then reach their own conclusion."

The series follows Julia, a woman whose dedicated her entire life to building her family and home. After a divorce she meets Benjamin and thinks she may have found the happiness she’s always been looking for. However, her family and friends soon suspect he’s after her wealth more than her love. As Julia hopes for the best, she turns a blind eye to mounting red flags.

Speaking about taking on the role of Julia in a statement Ormond said, “this is a fabulously written piece exploring family dynamics and I feel extraordinarily grateful to have been cast in Gold Digger and to be working with Vanessa and Marnie."

While the underlying story behind Gold Digger may be familiar, its creators intended to get viewers thinking by shaking up traditional gender roles. If you like the sound of that, you can catch Gold Digger 9 p.m, Dec. 12 on BBC One.