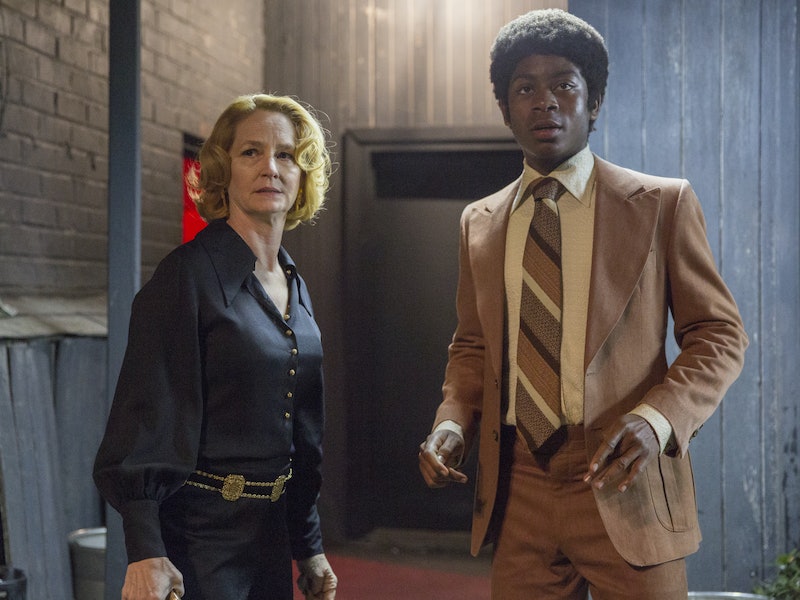 Showtime's new drama I'm Dying Up Here about the world of 1970s stand-up comedy certainly has a lot of real life material to draw from — both humorous and tragic. The series premiering June 4 follows comedy newcomers taking a shot at stardom in mid-1970s Los Angeles. Viewers familiar with the rock 'n' roll days of comedy will tune in to see glimmers of their favorite comics in the show's characters. But, what about the series sort-of matriarch, fictional Goldie's comedy club owner Goldie Herschlag? Is Goldie from I'm Dying Up Here based on a real person?

According to LA Weekly article "Inside Showtime's New Series About the Sunset Strip Comedy Scene in the '70s," I'm Dying Up Here is based on the nonfiction book of the same name. The 2009 book by William Knoedelseder chronicled the early days of Los Angeles institution, The Comedy Store. And, the real history of the comedy store gives more than enough inspiration for Showtime's ensemble cast.

The LA Weekly article discussed feuds, romances, and tragedy from the nonfiction book, like Andy Kaufman and Elayne Boosler's relationship, David Letterman and Jay Leno’s decades-long rivalry, and Freddie Prinze's death. But, as the article reported, the audience won't hear any of these names or see dramatizations of these real events unfold in the Showtime series — though they do inspire the show's characters and arcs. Former stand-up comic and series creator David Flebotte instead chose to create composite characters based on real comedians and Comedy Store alums. And, Goldie is one of the characters based on a real Comedy Store trailblazer.

LA Weekly reported that Melissa Leo's Goldie Herschlag is inspired by Comedy Store owner Mitzi Shore, who happens to be the mother of '90s comedy staple Pauly Shore. Mitzi Shore, like the fictional Goldie Herschlag, auditioned everyone who appeared in her club, mentored her comics, and often provided housing for them.

In a promo interview for the Showtime series Leo said, "Goldie is perhaps an homage to others who have come before." But, in the LA Weekly piece mentioned above, Leo is quoted as saying, “I don’t see how Goldie could’ve been invented without Mitzi ... To do something in the world that no one else came even close to dreaming of, it’s fascinating to me. She really made the first comedy club, and I will believe that until the day I die.”

While Leo is not exactly portraying Mitzi Shore, her character on I'm Dying Up Here was certainly inspired by her. Fans of the '70s comedy scene will just have to tune into the Showtime series to look for other familiar characters and storylines, though the fictional adaptations will provide surprising twists and turns for the audience.