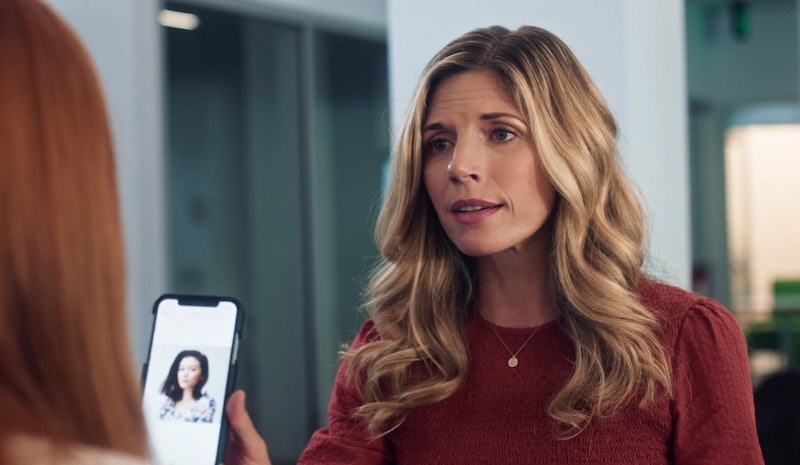 Lifetime movies often take the "ripped from the headlines" approach to somewhat fictionalized takes on real-life drama. So it would naturally track for fans to wonder if Gone Daughter Gone is based on a true story, after the Lifetime thriller premieres on Thursday, Jan. 16 at 8 p.m. EST/PT. The TV movie, which stars Paige Searcy and Andrea Bogart, follows a mother's plight to find her kidnapped daughter. Although abductions are a terrifying reality, Gone Daughter Gone doesn't necessarily seem to be inspired by any specific case on record.

In the movie — not to be confused with Ben Affleck's 2007 directorial debut, Gone Baby Gone — teenager Brooke (Searcy) "is starting over in a new town with her mom and wealthy stepdad when she befriends a new guy she meets at school," per Lifetime's synopsis. After Brooke is abducted from her home soon after, however, her mother Shannon (Bogart) "springs into action, taking it upon herself to find her daughter which puts her on a collision course with a deadly kidnapper."

More specifically, the Gone Daughter Gone trailer reveals that the older brother of one of Brooke's classmates finds himself in a bind, with a shady character demanding the $18,000 he owes him within 24 hours. His act of desperation involves breaking into "crazy rich" Brooke's home and demanding a $250,000 ransom from her mom. After spotting her daughter's captor's tattoos in the ransom video, Shannon takes matters into her own hands become an amateur detective of sorts.

While the film is an apparent work of fiction, there are three new Lifetime movies based on true stories that the network will begin rolling out on Jan. 18, as part of its Saturday night Winter 2020 Ripped from The Headlines slate. January's offerings include: Robin Roberts Presents: Stolen by My Mother: The Kamiyah Mobley Story, starring Niecy Nash (Jan. 18) and Chris Watts: Confessions of a Killer (Jan. 25).

In February, Academy Award nominee Nia Vardalos will star in Poisoned Love: The Stacey Castor Story (Feb. 1) about "a woman whose black widow tendencies are revealed with her murder plots to take down her ex-husbands and daughter." On Feb. 8, psychological thriller The Neighbor in the Window, starring Jamie-Lynn Sigler, will chronicle a suburban wife's plight to protect her family from a threatening neighborhood mom. Finally, Lyndsy Fonseca and Kirstie Alley will front You Can't Take My Daughter, which Lifetime described as "an inspiring story about a young woman who fought to keep her rapist from gaining custody of her daughter," on Feb. 15.

Even though Gone Daughter Gone will go the fictional route, there are still plenty of upcoming movies to satisfy true crime fans.

More like this
This First Look At 'The Gold' Shows Jack Lowden In A Whole New Light
By El Hunt and Sam Ramsden
At 28, Rosie Perez Risked Her Career To Stop Playing Stereotypes
By Gabrielle Bondi
'Abbott Elementary' Fans Probably Missed This 'Parent Trap' Easter Egg
By Sam Ramsden
Here’s Everything Coming To & Leaving Netflix In February
By Jake Viswanath
Get Even More From Bustle — Sign Up For The Newsletter
From hair trends to relationship advice, our daily newsletter has everything you need to sound like a person who’s on TikTok, even if you aren’t.