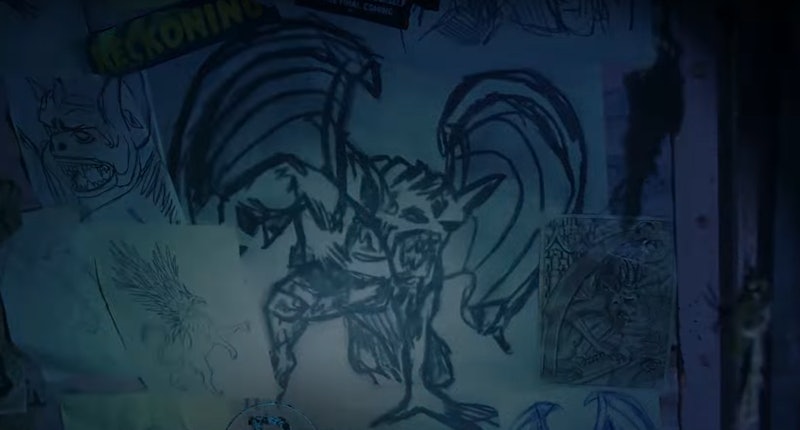 Archie might be playing football in juvie, but there's another, far more sinister game going on in Riverdale. In Season 3, Episode 2, Jughead and Betty use their investigative skills to unearth more information about the board game they Dilton and Ben were playing. Considering how high-stakes it is (it involves actual poison), viewers will be happy to know Griffins & Gargoyles from Riverdale is not a real game, but showrunner Roberto Aguirre-Sacasa told Entertainment Weekly in September that it is based on a popular fantasy game.

"The murder victims in the present were playing a game called Griffins & Gargoyles, which is, of course, the Riverdale version of Dungeons & Dragons," he explained. "Our kids discover that when their parents were in high school they also were playing this game, and there was a similar murder that happened in the past."

So if you thought this whole creepy gaming scenario seemed like something straight out of Stranger Things, you'd be right. Mike, Dustin, and the rest of the gang have been avid D&D players in both Seasons 1 and 2, and the game has provided plenty of parallels for the story itself.

That seems to be the case on Riverdale, too. But Griffins & Gargoyles is just as much inspired by spooky folk tales as it is actual game playing, serving as some sort of vessel by which this season's villain, the Gargoyle King, toys with his victims: So far, both Dilton and Ben have died as a direct result of the game.

"The central mystery in Riverdale is a pretty gruesome double murder or suicide in the woods that has a lot of ritualistic elements surrounding it," Aguirre-Sacasa said during an interview with Variety earlier this month. "And we’re sort of using as our inspiration the first season of True Detective, which felt like it was telling an occult murder mystery story. And that’s where we’re at. Whether it goes to the supernatural place or not, probably not."

And he reiterated the sentiment while speaking with reporters at New York Comic Con. "[The first season of True Detective] was sort of an occult, ritualistic murder, and it wasn't a supernatural story but ... it felt creepy and perverse and lurid," Aguirre-Sacasa said. "That's kind of the vibe that this year's villain and murder mystery has."

At the end of Episode 2, all the parents of Riverdale are gathered in Hermione Lodge's office, ready to hatch a plan on how to prevent their kids from getting sucked into the danger Gargoyles & Griffins brings to the table. "We made a vow in high school," Hermione reminds the group. "Look, now that the scout is back safe and sound, thank God, we can only assume that he'll start talking. And that whatever he says might lead back to us. To the secret that we buried all those years ago."

Of course, Ben then commits suicide, so their secret is safe...for now. But whatever Gargoyles & Griffins is, the adults in Riverdale definitely know the truth. And everyone knows that in this town, secrets won't stay buried for long.