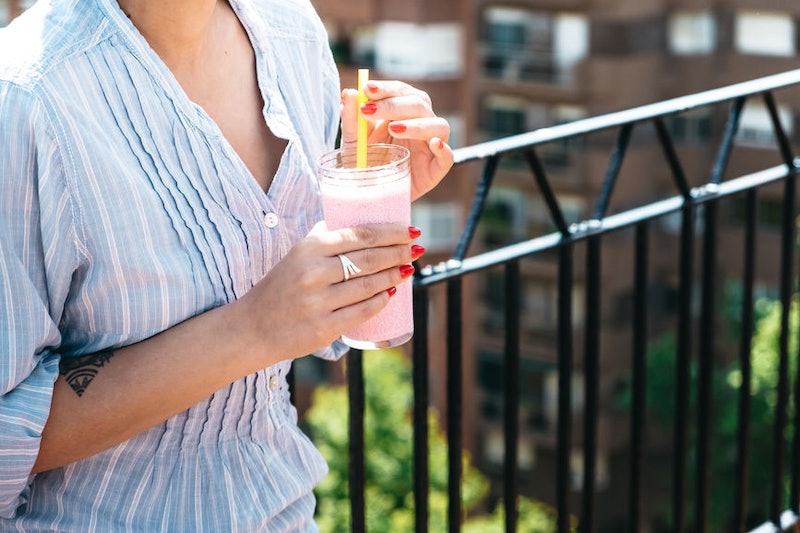 As much as my body doesn't want to believe this, it turns out gut health and mental health are pretty in sync. What you eat can have a direct influence on your mind, and vice versa. As someone who routinely aims for not-so-healthy foods, this has come as a somewhat shocking revelation. Often referred to as "the little brain", your stomach and gut are lined with a network of neurons that are connected to the brain via the vagus nerve, as the BBC reports. The vagus nerve allows your digestive system to have a constant connection to your mind, and has even been proven to "influence [your] emotional state" at times. If you've ever had the feeling of butterflies fluttering around in your stomach before a big event, it's all thanks to the relationship between your gut and mind.

To make that connection even more solid, your stomach also contains trillions of bacteria which make up the microbiome — a community of micro-organisms that live together in your gut, as described by the Microbiology Society. The microbiome has the job of breaking down food, supporting immunity, and affecting your mood. So if you don't keep the bacteria chilling in your digestive system happy, it can lead to inflammation which is "believed to be one of the biggest causes of depression," as nutritionist Rebecca Pilkington told Culture Trip.

It's also worth noting that 95 percent of serotonin is created in the gut. Serotonin is a chemical compound and neurotransmitter that contributes to happiness, and is often believed to be linked to depression. "Mood-boosting" dopamine is also formed in your digestive system, which is why if you're not taking care of the bacteria in your gut you can negatively affect your overall mental wellbeing.

It's no surprise, then, that many of those who suffer with irritable bowl syndrome (IBS) report that anxiety and stress are often their main triggers. IBS and generalised anxiety disorder often go hand in hand as a result of the deep connection between your stomach and mind. "People with anxiety tend to worry greatly about issues such as health, money, or careers," Edward Blanchard, professor of psychology at the State University of New York told WebMD. "Those can lead to other symptoms that include upset stomach, trembling, muscle aches, dizziness, and irritability."

The link between your digestive system and anxiety can also explain why some people may suffer with constipation or diarrhoea as your body is in "fight of flight" mode which can cause your digestive system to effectively "hold" or "release", as nutritional therapist and gut expert Eve Kalinik explained to Culture Trip.

Through studying how the gut can react to episodes of anxiety, it has also been suggested that depression could be linked to the gut, rather than the brain. "Not one valid study has proven that depression is caused by a chemical imbalance in the brain," Kelly Brogan, MD, told health site Well+Good. The science supporting this suggests that "depression is primarily an inflammatory condition," similar to other chronic diseases. There have also been studies that have speculated that other mental health conditions such as bipolar disorder and schizophrenia "may also be associated with alternations in the microbiome," as opposed to being solely an issue occurring within the brain.

But before a conclusion can be drawn, a solid connection needs to be made. According to a study conducted at the Flanders Institute for Biotechnology and the Catholic University of Leuven, researchers have found that patients suffering with depression also had low levels of certain bacteria compared to those who "claimed to enjoy a high mental quality of life." While this is promising, an abundance of tests will need to be undertaken before human trials are even considered, as The Guardian reports.