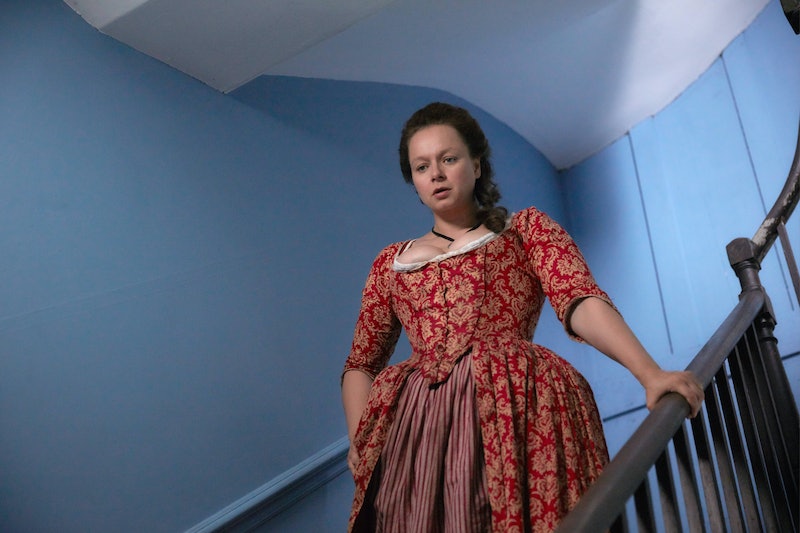 It's all right there in the name: Harlots. You know what the word means, but you also know that it's out of use in 2017. Hulu's newest original drama is about sex work back in a time and place when the h-word was in common use, specifically in Georgian England. Samantha Morton plays a madam and mother in Harlots, which premiered on Hulu on March 29, with a new episode dropping weekly. But how accurate is Harlots to the era it's depicting? And are the women at the center of the action based on real people? Harlots is an embellished true story, in that it began with a document that guided sex work in the late 18th century.

That document is Harris’s List of Covent Garden Ladies, anonymously penned but comprehensive. The volume was regularly updated and re-circulated and gave particulars and reviews for all the women engaging in sex work in London. (If you're interested in old-timey descriptions of sex acts, you can pick up a copy of Harris's List of Covent Garden Ladies on Amazon. It'll be great material for live readings on wine nights, I'm sure.) The list was sort of like a Zagat's for picking out a "lady of the evening," and ripe for dramatic interpretation.

According to the Los Angeles Daily News, the idea for Harlots began to take shape when producer Alison Owens gave a copy of the guidebook to Moira Buffini, writer and co-creator of the show with her collaborator Alison Newman. The very existence of a book like this shows how commonplace and public the exchange of money and sex was in Georgian England. And the creators of Harlots saw in this history an opportunity to tell different stories about the women who earn their living this way than the ones that are normally prioritized. "There are so many clichés in dramas about prostitutes or whores where they either get saved, married, redeemed or they die a horrible tragic death," Buffini told the Los Angeles Daily News. "We wanted to do none of those. We really wanted to show ordinary people surviving in a really brutal economy."

That's not to say that Harlots won't deal with the darker side of the business, specifically the exploitation of young girls. (In one storyline, Morton's character Margaret promises the virginity of her youngest daughter to the highest bidder.) But Buffini told Refinery29 that the series is concerned with the idea of "ownership" and women of all stripes negotiating a certain kind of independence with whatever tools are available. "It’s about an economy in which women have no power and how some women try to turn that to their advantage," the writer said. In fact, some of the sex workers had more respect and fame than a high-born lady might attain. Downton Abbey's Jessica Brown Findlay plays Margaret's oldest, Charlotte, is one of these such women.

In order to stay on track and deliver a feminist piece of work that's truly about the women it dramatizes, all eight episodes of the first season have been written and directed by women. At Hulu's Television Critics Association presentation this winter, Owen promised that Harlots would feature "no male gazes." (Per Deadline.) And though the series isn't interested in censoring the bodies of its characters, male or female, the creators wanted to push back against common gratuitousness and nudity-for-titillation. Any Harlots sex scene is "always to help drive story, or it’s funny, or it’s something to do with a character," Newman explained to Refinery29 in the same interview.

It has a title that may raise a few eyebrows, but Harlots strives to give the full picture of sex work in late 18th century from the point of view of the women who ran it, which is a very important lens to see on TV.