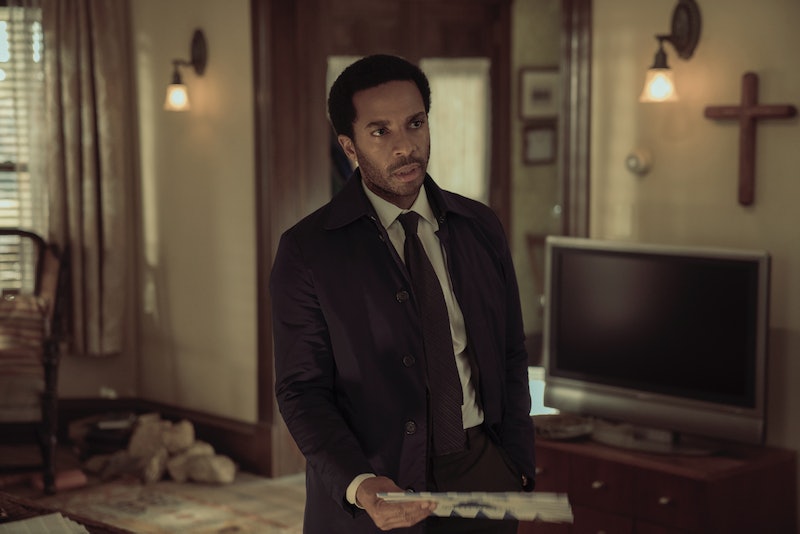 Spoilers for the Castle Rock finale ahead. Anyone else feeling the need to go take a hike in the woods after that Castle Rock finale? Bird formations and weird sounds aside, some fresh air might help us figure out exactly what just happened. Is Henry Deaver evil on Castle Rock? The Season 1 finale leaves this question unanswered, so bring on Season 2!

In the episode leading up to the finale, it was revealed that the Kid was grown-up Henry Deaver in an alternate universe to the one audiences have been following for nine episodes. He returned home after learning his father had killed himself and discovered a young version of André Holland's character held captive after thinking he was sent by the Devil — which explains why our Henry was missing for 11 days and returned to the snowy woods in 1991 with no frostbite or memory of his captivity. As it turns out, he returned to 1991 with Bill Skarsgård's Deaver as well.

So, there are two Henry Deavers in this Maine town. One, played by André Holland, is a lawyer who as a child was adopted by Ruth and Matthew Deaver. This Henry heard the sounds in the woods that plagued his father and tried to kill him. The other Henry is Ruth and Matthew's biological son, and a scientist/doctor. He never heard the voices as a child, but got accidentally transported through time and became known as the Kid after being held in captivity. So, presuming that both of these are the "real" Henry in their respective worlds, which one is the real threat?

As Vulture's recap of Episode 9 points out, the idea of a multiverse was brought to the Stephen King connected universe by The Dark Tower. In the Season 1 finale, what Ruth tells Molly about feeling that sometimes Alan is alive goes along with this multiple realities version of events — and adds a new layer of science fiction to how Ruth experiencing Alzheimer's on Castle Rock.

At the end of the finale, lawyer Henry has locked doctor Henry back up below Shawshank. It appears that things have calmed down in Castle Rock, too. The adopted Henry has been accused of bringing death and destruction to his home town, but it seems like the other Henry is the one who is actually able to manifest it.

"Some folks get away," Deaver says in the final voiceover monologue. "Spend the rest of their lives trying to forget this place. Maybe they do forget, for a while. Some never leave, no matter how hard they try. Most of us, they're trapped here for a reason. Everyone in this town has some sin or regret. Some cage of his own making. And a story, a sad one, about how we got this way. 'It wasn't me, it was this place.' That's what we say. But that's a story too. It doesn't change a thing. Maybe something turned you into a monster. Or maybe you were one all along."

What does that mean! ? Is he referring to himself? Henry has never seemed outwardly evil. On the other hand, there was a pretty demonic face that popped out of Skarsgård's character during their confrontation in the woods. Even if he started out as Ruth Deaver's innocent son, he's changed now. He's possibly immortal, gets what he wants by manipulating others to commit murder, and hears the bad sound that (as a child) he never did.

Thankfully, there are not only plenty of questions to ponder before the series returns for Season 2, there are clues to catch as well. Did anyone else spot that child's grave next to Ruth and Alan's shared headstone in the final moments, too? Maybe that has something to do with it. There's also a brief shoutout to a character featured in Needful Things, Wilma Jerzyck.

That said, this all may be irrelevant in Season 2 if Jackie Torrance's writing retreat out West goes the same way as her infamous uncle. While the Castle Rock finale does give fans some answers, there is a lot left to explore and it's sure to be exciting, spooky, and heartbreaking as ever.