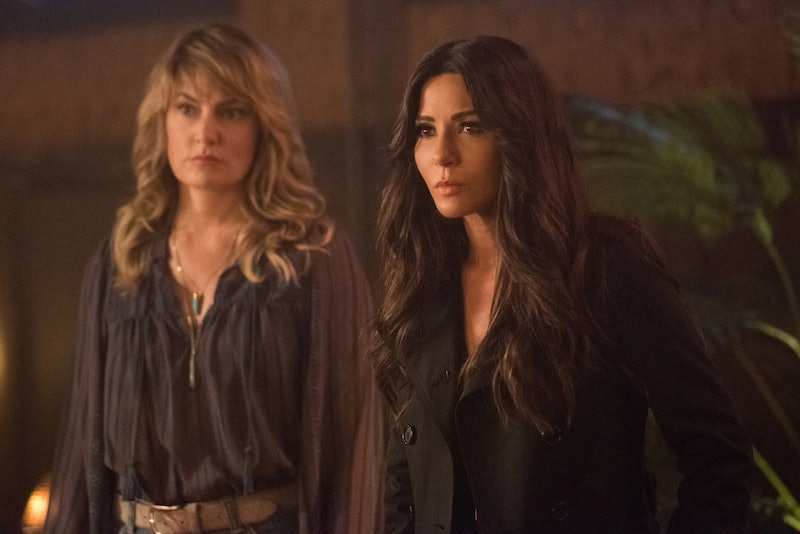 Hiram Lodge is often a suspect on Riverdale, but he's probably not the villain terrorizing the town in Season 3. Now, fans have turned to a new possibility: is the other Lodge, Hermione, the Gargoyle King on Riverdale? The newly minted mayor could be pulling the wool over our eyes.

For one thing, when Hermione confessed to Archie that she hired an actor to pose as an FBI Agent and test his loyalty in Season 2, she did it from the edge of a cliff. That proves that she has a flair for the dramatic. That said, let's be real, "Flair For The Dramatic" is probably a required elective at Riverdale High. Who doesn't live for spectacle on this show?

Hiram seems a likely candidate for The Gargoyle King namely because he, like the woods-haunting figure, are both trying to take control of the town. But Hermione is, of course, connected to Hiram, so it's not that much of a stretch to think she could be involved. When Veronica found evidence that Archie was framed, the folder on her mother's computer has a symbol that looks an awful lot like a G&G glyph. It's possible, then, that Hermione and Hiram could be in cahoots, or that Hiram is simply the perfect red herring, and Hermione is really the one pulling the strings.

A fan theory from Reddit user Theynotsmarterthanus suggests further reasons why Veronica's mom may be behind the Gargoyle King. First of all, she's the one who initially finds Griffins & Gargoyles. Secondly, wasn't it a little strange that such a skittish, religious teenage girl wound up in detention in the first place? She's also the one Alice told about being pregnant... which doesn't really serve as a motive, but does prove that she has more information than other members of the group.

As an adult, Hermione banned the game and thus ensured that everyone in town started playing, because everyone knows when you tell teens not to do something, they'll only want to do it more. In fact, the only main character who has really, truly, successfully not gotten involved in Griffins and Gargoyles is Veronica. She's been way too busy with exonerating Archie and running her speakeasy to start playing the game. Convenient, isn't it?

The reddit theory even suggests that FP Jones could be working for Hermione, like he did in Season 1, and he was outside the house the night Betty and Alice were "visited" by the King in their home. Plus, in order to use a mock-up of Daryl Doiley's grave to threaten Betty and Alice, the King would have to have been present (or know someone who was present) at Betty's meeting with the parents about the Midnight Club. Both Hermione and FP were there.

Finally, it's time for the moms of Riverdale to start revealing their darker sides and wreaking their own havoc. In Season 1, Cliff Blossom was the killer; in Season 2, the Black Hood turned out to be Hal Cooper. Even though it's clear that the parental generation is deeply involved in the resurgence of Griffins and Gargoyles, the Gargoyle King can't be another dad — right?

More like this
Everything To Know About 'Only Murders In The Building' Season 3
By Gretchen Smail and Kadin Burnett
This 'Gossip Girl' Wardrobe Error Has Gone Viral On TikTok
By Alyssa Lapid
'The Last Of Us' Has Officially Been Renewed For Season 2
By Darshita Goyal
A New 'And Just Like That' Table Read Pic Confirms A Key Character's Return
By Jack Irvin and Grace Wehniainen
Get Even More From Bustle — Sign Up For The Newsletter
From hair trends to relationship advice, our daily newsletter has everything you need to sound like a person who’s on TikTok, even if you aren’t.