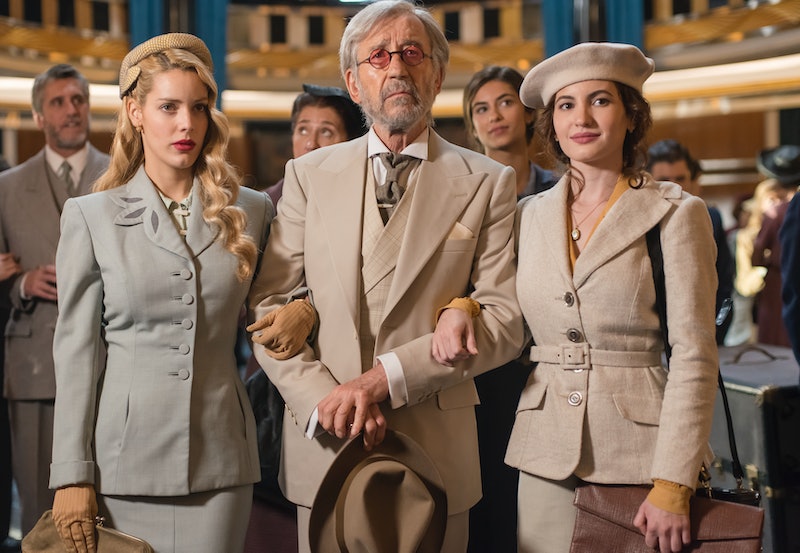 Murder mysteries set aboard a ship have captivated audiences for as long as humans have been traveling the seas. Who can resist a story about a group of strangers isolated in the middle of a vast ocean, forced to figure out if there is a murderer in their midst? Netflix's High Seas is one such tale, described by Netflix as full of "love, intrigues, and many lies". While High Seas is not based on a true story, the production has some historical inspirations that may give viewers some insight into where the story is going.

High Seas (aka Alta Mar) is Netflix's fourth original Spanish language project from Bambú Producciones, the studio behind several other lavishly decorated shows like Cable Girls, Velvet, and Grand Hotel. Created by Ramón Campos and Gemma R. Niera, High Seas is set aboard a 1940s transatlantic luxury liner traveling from Spain to Brazil. A woman is murdered, but there's a twist: her name does not appear on the passenger list, and no one on the ship remembers her.

It's a wild premise that seems like it would be more at home in The Twilight Zone or an Agatha Christie novel than in the real world. And it's true, the show is not based on any specific voyage or real life murder case.

Eagle-eyed viewers should be able to see similarities in the show to these ships, such as one of High Seas' advertising posters mirroring an old drawing of the SS Normandie and a map found in the Queen Mary dining room being similar to one featured on the show.

While these two ships are beautiful remnants of our past, they also have checkered histories. The SS Normandie is most well known for the fact that while it debuted in 1935 as the largest and fastest passenger ship, by 1942 it was capsized and frozen over in the Hudson River at Pier 88 in New York City. A worker accidentally set fire to the back-then highly flammable life-preservers, and New York firefighters had to just watch the ship burn because their American-made hoses wouldn't fit into the French-made sprinkler system onboard.

This is unlikely to happen on High Seas, of course, but the fact that the tragedy largely occurred because of a series of human errors may have some application to the show. Really, anything can happen when a bunch of strangers are kept in an enclosed space for a long period of time, surrounded by people they find they may not like very much.

Even more intriguing is the Queen Mary, which is now considered to be haunted. This of course makes it a popular destination for occult seekers, who visit to check out Cabin B340, a room supposedly haunted by the spirit of someone who was murdered there. This may have more pertinence to High Seas, as the trailer shows a bottle of arsenic, and hints that the woman thrown overboard was grappling with someone in the cabin beforehand. Is it possible someone else was killed in the cabin before she was?

These could all be hints, or they all could be just red herrings. It looks like Campos and Niera are going to weave a tale of love, deception, and jealousy, and like any great murder mystery, it's impossible to tell who's really at fault until the very end. Audiences will just have to wait and see, but one thing's for sure, High Seas is surely going to be a wild voyage.

More like this
Evan Peters Decompressed After 'Dahmer' By Watching This Will Ferrell Movie
By Grace Wehniainen
It May Be A While Before 'All American' Season 5 Drops On Netflix
By Grace Wehniainen
The First Trailer For 'That '90s Show' Includes So Many Nods To The Original Series
By Jack Irvin, Alyssa Lapid and Grace Wehniainen
Elizabeth Debicki On Her Approach To The Most Debated Scene From 'The Crown'
By Grace Wehniainen
Get Even More From Bustle — Sign Up For The Newsletter