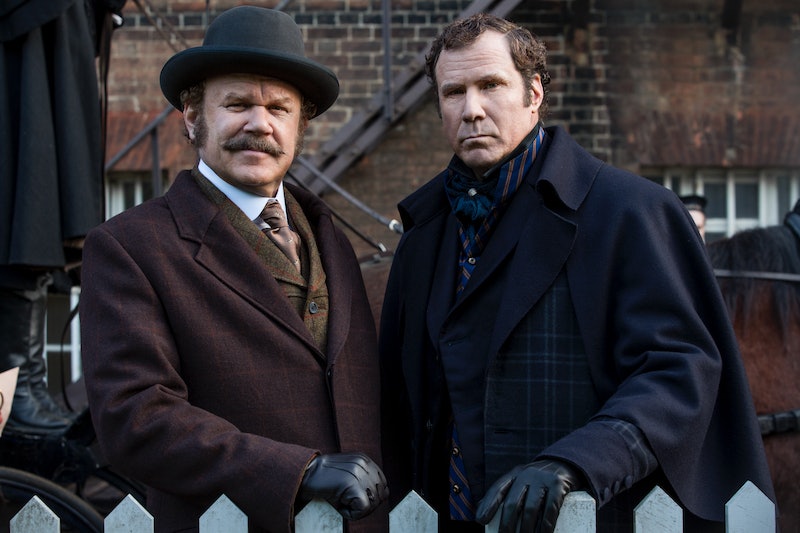 If someone asked you to name a more iconic duo than Sherlock Holmes and Dr. John Watson, only a few pairs would probably come to mind —perhaps including Will Ferrell and John C. Reilly. It's pretty perfect then, that the duo from Step Brothers and Talladega Nights are set to star as Holmes and Watson in a new movie called, well, Holmes & Watson. The new detective comedy comes out on Dec. 25, and while Holmes & Watson isn't based on a real Sherlock Holmes story from the original books written by Sir Arthur Conan Doyle, it will still delight Anglophiles and Sherlock fans alike.

The new movie mostly takes place in new territory for Holmes (Ferrell) and Watson (Reilly): A little place called Buckingham Palace. After the detective and his compadre are called to the palace, they receive a note that challenges them to solve the case in four days or else the Queen of England will be killed next. If you're a fan of Doyle's stories from the late 19th century, you'll probably immediately realize that this story doesn't quite resemble the source material, though it certainly satirizes the whole detective genre.

You'll still find that many of the characters in the new movie are familiar to you even if you didn't read Doyle's short stories, though. The ransom note from isn't exactly anonymous, as it's signed by the notorious criminal mastermind James Moriarty, who appears in just two of Doyle's stories, according to the official site of the author's estate, despite being one of his most famous creations.

The estate site also notes that Holmes mentions Moriarty in five other stories, and the character has appeared in subsequent movies including the 2011 movie Sherlock Holmes: A Game of Shadows. That doesn't mean that Holmes & Watson will be anything like the 2011 movie that stars Robert Downey Jr. and Jude Law as Holmes and Watson, respectively. In fact, the movie parodies certain aspects of the past portrayals of the British crime-solvers.

Creating a new case for Sherlock Holmes and Dr. Watson to solve is a daunting task. The Atlantic reports that the character of Sherlock Holmes has been portrayed in films more than 200 times over the past century, so pretty much everything's been done. Strangely enough, though, Doyle's work mostly steers clear of mentioning the royals, and amidst the current U.S. obsession with Meghan Markle and Prince Harry, it seems like the perfect time for Holmes and Watson to save the Queen of England. For the most part, though, you can just think of Holmes & Watson as a mash-up of classic Conan Doyle and the silly humor that its stars are so well-known for.