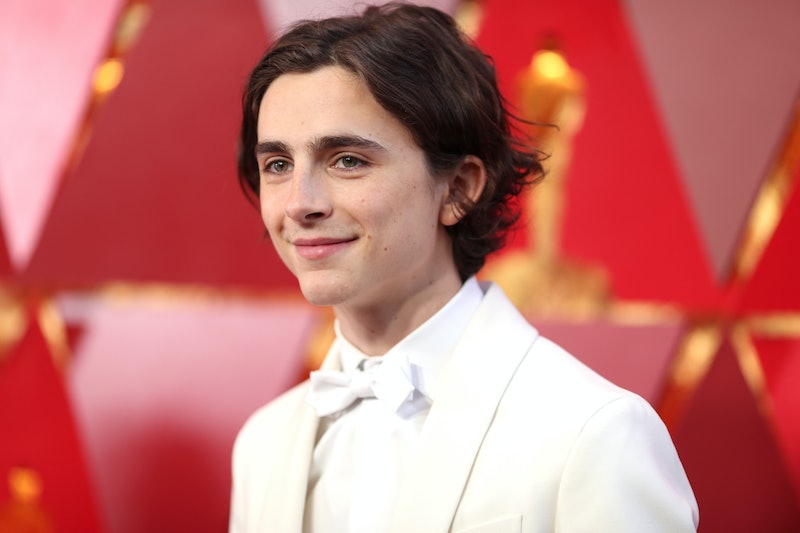 It's late July, and that means the evenings routinely transform into those sweet, hot, summer nights. So it's quite fitting then that on July 27, a new film from A24 called Hot Summer Nights opens in theaters. The film, which takes place during the summer of '91 in Cape Cod, MA, stars Timothée Chalamet as a teen who gets involved in dealing drugs with a new friend (Alex Roe) and finding romance with his friend's sister (Maika Monroe), getting in way over his head when it comes to both. The plot certainly has a true crime tinge to it, but did it really happen? Is Hot Summer Nights a true story?

The film itself is not a true story, but like many films of this nature, it did take some inspiration from real life — enough that it even sports a "mostly a true story" narration, according to The Harvard Crimson's Caroline A. Tsai. The story comes from a script by Elijah Bynum, a script that in 2013 landed on the coveted Black List, an annual collection of the most acclaimed unproduced scripts in Hollywood. Bynum is making his debut as both a director and screenwriter with the movie, and while the characters and story are wholly fictional, Bynum did reach into his own past when concocting his script.

Bynum is a Massachusetts native, and while he didn't grow up in Cape Cod, he did vacation there sometimes in the summer, according to YouTube footage of Bynum at last year's South By Southwest premiere of the film from LoveCelebsBlog. Bynum also stated at SXSW that his main inspiration for the story came from two guys he knew in college. Like the main characters of the film, the two guys were opposites but friends, and they began selling weed around campus. After starting small, their business grew until it got out of control, driving them apart in the process. "What was most fascinating was watching their friendship ... as their business grew, their friendship also grew, but then the more successful they got their friendship starting pulling apart at the seams," Bynum said at SXSW. "And it ended in quite dramatic fashion one night. They both disappeared and no one knows what happened to them."

Another big inspiration on the film was Hurricane Bob, a real hurricane that struck New England in 1991 and serves as the backdrop for the film. Bynum was too young to remember the hurricane firsthand, but he did incorporate his memories of others talking about it from when he was younger. "I was only four years old, but I grew up in Massachusetts, so I had heard of it. You know, people who were a little older than me had talked about it cause it’s the biggest hurricane in New England history. We don’t typically get hurricanes that far up the coast, so there’s definitely some legends surrounding that," Bynum told Consequence of Sound's Michael Roffman. "It felt like a very special time and that’s why we went with it."

In addition to his real life experiences, Bynum also took some inspiration from other coming-of-age films, including the classic '80s film Stand By Me. "Stand by Me was a huge influence, and Stephen King is one of the greatest writers in the last 50 years," Bynum told Consequence of Sound. "I think there’s a way he taps into things that are very visceral and emotional and also just very American. I think the story, in a way, is this bygone American era that adds the nostalgia without it feeling pastiche necessarily."

So even though Hot Summer Nights isn't technically a true story, the reason it seems so plausible is because it was at least partly inspired by actual events, as witnessed by the film's writer/director Elijah Bynum, making for one impressive (and believable) debut effort.