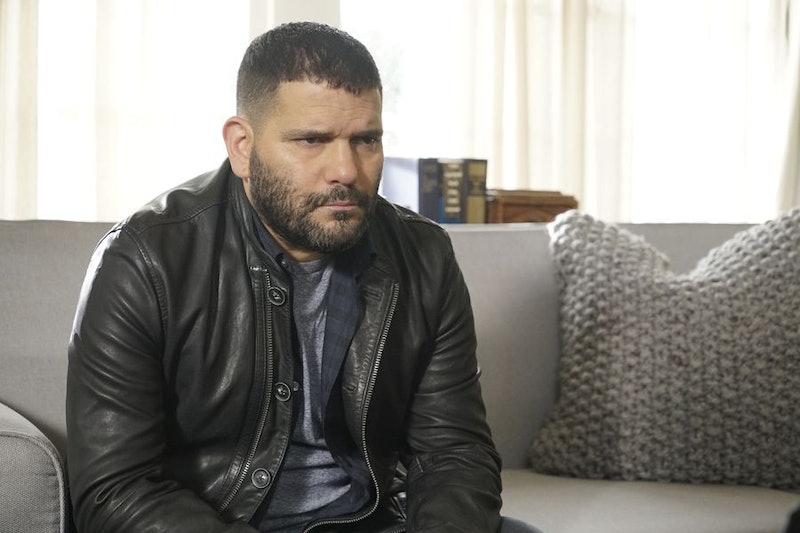 Is it just me, or is Scandal seriously stressing anyone else out this season? I didn't think it could get any worse after president-elect Frankie Vargas was assassinated during his acceptance speech, but then, it did. While investigating who was really behind his murder, Huck was shot by his girlfriend, Meg, and apparently left for dead... or was he? Is Huck dead on Scandal, or is this just another one of the show's misleading plot twists?

When Thursday night's episode began, surprisingly enough, he was alive. Bloody, and locked in a car, but alive. That just goes to show the one rule of television fire fight: If there's no head shot, death is not guaranteed. He didn't have much time to escape, because Meg pushed the car off a cliff and into the water, which she obviously thought would finish the job and hide the evidence. But this is Huck, so was anyone actually surprised when he managed to fight his way out of the car like a pro? Come on, give this guy a real challenge.

And for most of the episode, Huck's fate was up in the air. While he was trapped in the car, potentially drowning, he dreamed that he (and Pope & Associates) was trying to save himself, but he couldn't. Eventually, he managed to get himself on shore, and by the time Olivia found him on the beach, he was unconscious.

The good news? Huck is alive, stable, and being treated in the hospital. The bad news? It doesn't seem likely that he'll escape this one without major lasting damage, according to the doctor who spoke to them.

Everybody, pour out a little red wine and popcorn in honor of our (potentially fallen) gladiator. He better make it out of this alive!