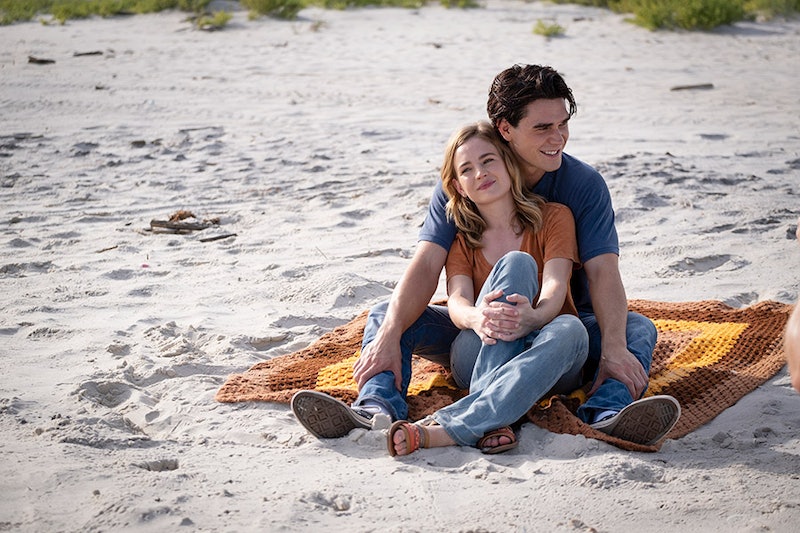 It may not get much press in traditional Hollywood outlets, but faith-based films are big business. Low-budget indie films that are targeted to the Christian community can really rake in the dough, as evidenced by films like the Kevin Sorbo-starring 2014 drama God's Not Dead, which was a monster at the box office. The trend appears to be growing, too, with bigger stars taking part in some of these films, like the Octavia Spencer and Sam Worthington-led The Shack, which earned nearly $100 million in 2017. The latest faith-based potential blockbuster is I Still Believe, which is unique in the genre since it's a YA romance. But is I Still Believe based on a true story?

The film sports an exciting cast composed of A Dog's Purpose co-stars Britt Robertson and KJ Apa, along with Oscar-nominee Gary Sinise and country music legend Shania Twain. It's about a Christian singer-songwriter named Jeremy Camp (Apa) and the film details his fledgling career and the romance he forms with his eventual wife Melissa (Robertson), who is suffering from cancer. It's a tragic love story in which faith obviously plays a role, but did it really happen? If you follow Christian music, then you probably already know the answer. I Still Believe is based on the life of actual musician Jeremy Camp, who previously published a memoir of the same name.

Camp is a successful musician in the world of Christian music, with four gold records and five GMA Dove Awards (basically the Christian music equivalent to a Grammy) to his name. His first marriage to Melissa Lynn Henning-Camp, a relationship which takes up the bulk of the film, ended in tragedy not long after it began. The pair dated for a few months upon meeting in their early twenties, and then Melissa was diagnosed with ovarian cancer. Not long after, Jeremy proposed, and the pair married in October 2000. During their honeymoon, Melissa's cancer progressed, and she eventually passed away in February 2001 at the age of just 21.

Her death obviously had an outsized effect on Camp's life moving forward, including his music. The first song he penned after Melissa's passing was called "I Still Believe," and it offered the message that even in trying times, neither he nor Melissa ever lost their faith. Camp eventually remarried in 2003 to singer Adrienne Liesching, but he'll never forget his first love.

The film does a pretty accurate job of portraying Camp's relationship with Melissa, as the singer has stated that he had a hard time watching it. "I'm blown away that God allowed me to do this but it's hard — watching the film and being a part of it," Camp told The Christian Post. "It's the hardest part of my life, where I actually experienced some very difficult grief and pain. So I think the reality is, so every time I watch it, I do break down because I'm reminded of that pain."

I Still Believe is not your ordinary YA romance, nor is it your typical faith-based film. It's a mix of both that is made all the more powerful by the emotional true story at its core.

More like this
Gerard Butler Insisted On Adding This Pivotal Scene To 'Plane'
By Catharina Cheung
Jemima Khan Used Her Own Life As Inspo For 'What’s Love Got To Do With It?'
By Darshita Goyal
Pamela Anderson’s Dating & Marriage History Could Be Its Own TV Series
By Jake Viswanath
Owen Thiele Asked Sundance Attendees About Films That Don’t Exist
By Grace Wehniainen
Get Even More From Bustle — Sign Up For The Newsletter
From hair trends to relationship advice, our daily newsletter has everything you need to sound like a person who’s on TikTok, even if you aren’t.