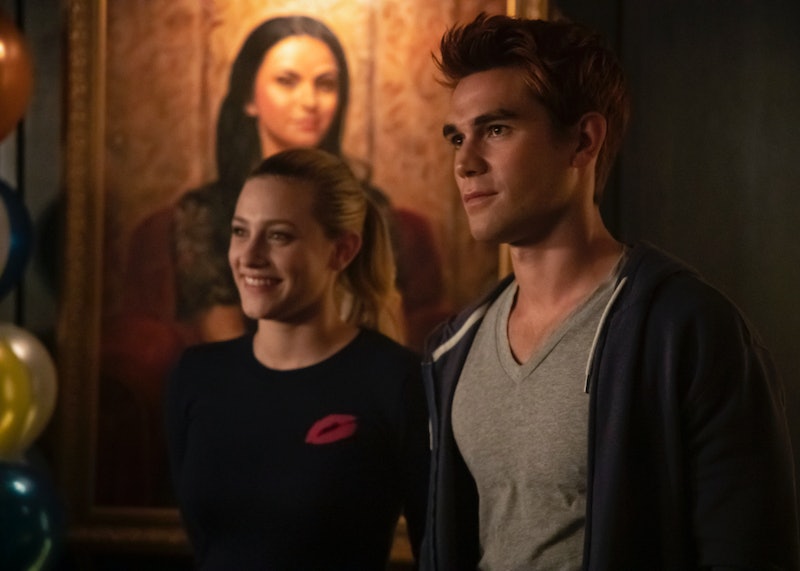 The debate over whether Archie should be with Veronica or Betty has been raging on since the '50s, and thanks to Riverdale, fans are still debating the famed love triangle today. In a new BuzzFeed video, Archie himself weighed in on the question when KJ Apa said he hopes Betty and Archie are endgame. His choice could prove to be a controversial one, given the popularity of Jughead and Betty's romance, but hey, the heart wants what the heart wants.

In the video, Apa answers fan questions while playing with a pair of adorable puppies. After fielding a few questions about scars and his favorite actors, he gets to the good stuff: Archie's love life. "I think the idea of Archie and Betty is really cool just because it's so iconic," he shared. "And I think Archie and Betty being endgame is something really cool... I think the fans would really love that."

Way back in Season 1, Betty had a serious crush on her best friend and literal boy next door Archie, but as Riverdale has progressed, Betty and Jughead have become fan favorites. As for Archie, he's dated a number of characters, and formed a strong bond with Veronica. Despite the sheer number of murders, cults, and serial killers they've had to deal with in their young lives, all of the characters are still in high school, so there's still time for the show to explore Betty and Archie as a couple down the road.

Apa isn't the only one who wants to see Betty and Archie happen at some point. In a May 2019 interview with Us Weekly, series creator Roberto Aguirre-Sacasa revealed that he also believes the iconic duo should get together on Riverdale before the show ends. "I think that that's one of the dynamics we haven't played is the idea of Archie and Betty together romantically," he said. "I think in a teen show that if we somehow went seven years in that and never saw that, I think it would be a failure."

While both Apa and Aguirre-Sacasa would like to see the Betty/Archie pairing play out onscreen, they're also big fans of Bughead. Apa told BuzzFeed that he likes Bughead, and he thinks all of the characters are "exactly where they need to be" for now. Ultimately, he'd like to see his character sidestep the ship wars by making the bold choice of choosing himself for once. "I want Archie to be single, and focus on him for a second," he said.

Maybe being single for a bit is exactly what Archie needs to do in order to realize he and Betty could be perfect together.