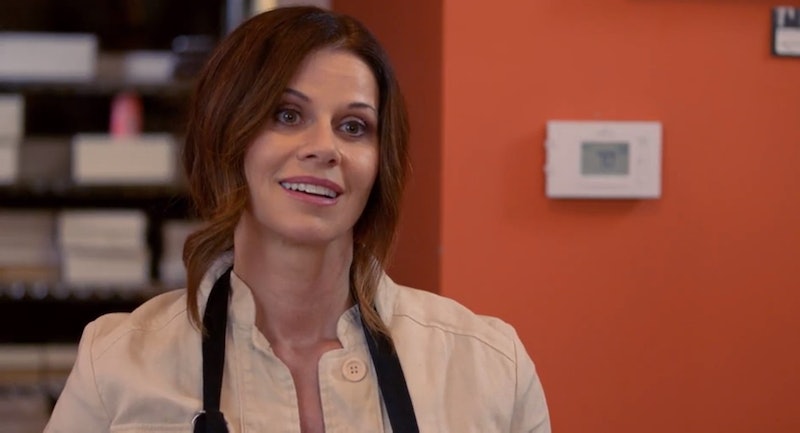 Moving to a new city is a scary experience for most people. It's not easy to leave a familiar place and start over. Fortunately, things tend to settle down after a while and may even lead to a great new relationship — unless you happen to be in a Lifetime movie. In Bed with a Killer isn’t based on a true story, thankfully, but the plot may make fans think twice about falling in love.

Formerly known as A Deadly Romance, this flick stars Jennifer Taylor as Lena, a mom who relocates to a new town with her daughter and starts dating Michael, who appears to be the perfect guy. It's all good until Lena's new friends start disappearing and she realizes that Michael has a sordid past. Now, she has to find her friends and come to terms with the truth about her new lover. Yep, this is a classic Lifetime plot that will dish up drama for dedicated fans.

In Bed with a Killer's trailer starts off with Lena and an unknown friend talking about Michael’s reputation as a ladies' man. He's shown on a date with another woman, but things quickly turn sour when he murders her one night. Lena's friend Heather warns her about Michael, but Lena still goes on a date with him. She says that she's heard rumors about him but she doesn't care because she has inexplicably fallen in love in a short time.

Heather smartly points out that though Michael is caring and attentive, that's "usually who's behind the murder." But apparently she isn't that bright because she then confronts him about his murderous activities alone in the dark. Oh, Heather. You are about to die a horrible death because you broke murder movie rule No. 101. The clip ends with Lena and her daughter wandering in their yard with a flashlight as someone watches them from afar.

Hopefully, this trailer is not in chronological order because it wouldn’t make sense for Lena to date Michael after hearing about his girlfriend’s gruesome murder. If Lena doesn't realize that a man who immediately wants to date someone new after his girlfriend just died is super suspicious, then she kind of deserves whatever happens in this movie (not really, but come on!!). It's not clear if Michael has murdered other women, but surely it wouldn’t be that hard for the murder to get traced back to him with all these rumors going around.

But this is a Lifetime movie, so the local authorities are either non-existent or completely unhelpful. And this town must have a terrible selection in men if he is the certified "ladies' man" because he looks like an untrustworthy creeper. One thing is for sure: Lena will have to take down Michael somehow if she doesn’t want all of her new friends to die.

Find out the truth about Michael and how Lena will escape his grasp when In Bed with a Killer premieres on Feb. 8 at 8 p.m. ET.