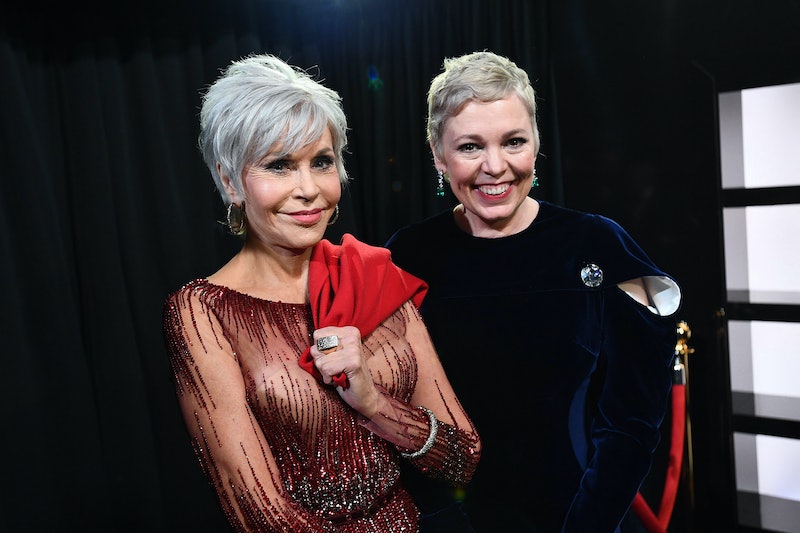 Dyeing your hair is a big deal, no matter what people tell you. Whether you've gone for the new colour before or not, it all still feels like a bit of a gamble. So when Olivia Coleman and Jane Fonda turned up to the Oscars 2020 with brand new dos, it was a pretty bold move. Especially considering that Colman dyed her hair the day of the event, as was later revealed by her stylist. But is it a good idea to dye your hair the day of an event, like Colman did, or should you try to get it done a few days prior? I chatted to some experts to find out.

Coleman's chosen hairstylist Marcus Francis was the expert responsible for her amazing bleach blonde colour, which she debuted at the Oscars. Just a week prior, she had been at the BAFTAs rocking her signature brunette locks, so it was clear the change had happened within that short period.

But Francis revealed to Allure magazine that the colour swap had actually taken place that very morning, right before the Oscars ceremony. On the morning of the event, he actually shared a snapshot of some hair mixing bowls, along with some hair dyes, alongside the caption, "mixing up something exciting."

Impressively, it appears that Fonda also dyed her hair the day of the event. Or, at least, very soon beforehand. Fonda, who is known for her gorgeous blonde locks, showed off a brand new silvery-grey look at the Oscars. It was a total surprise to her fellow attendees and fans at home, so my guess is she did it as close to the event as possible to keep things under wraps.

Colourist Jack Martin shared news of the colour swap on his Instagram, and revealed the whole process took a whopping seven hours to complete. Wow.

He wrote, "I had the honor and the pleasure to transform the legendary actress @janefonda hair specially for the 2020 Oscar. Spending 7 hours with this amazing Hollywood star and witnessing her energy, beauty, strength and femininity was so inspiring." Later, he explained that Fonda's "goal color was a silver icy blonde to surprise everyone at the 2020 Oscar presenting the final award winner for the movie of the year." He then went on to detail the exact process of her new cut and colour.

However, while it's easy to admire Colman and Fonda's choices from afar, is it actually a good idea to dye your hair the day of an occasion or big event, IRL? Having expert colourists at your beck and call like a celebrity is one thing, but what about us average Joes?

Shannon Gallacher, Master Colourist at John Frieda Salons, explains that, when it comes to this question, "it really depends on what colour hair you have."

If you have highlights, for example, she recommends giving it a while before your big day. "I always prefer highlights a week after they have been done once they have settled in a bit," she tells me.

But in terms of all-over colours, there are actually great benefits to dyeing your hair right before an occasion: "With a tint – whether blonde, dark, or red – I would do on the day as nothing beats that fresh colour glossiness. Bleaches and cool colours are best fresh too."

However, you may want to consider having your all-over colour done the day before, rather than the day of as an insurance policy; that way, if something catastrophic goes wrong, at least you have a little bit of time to fix things.