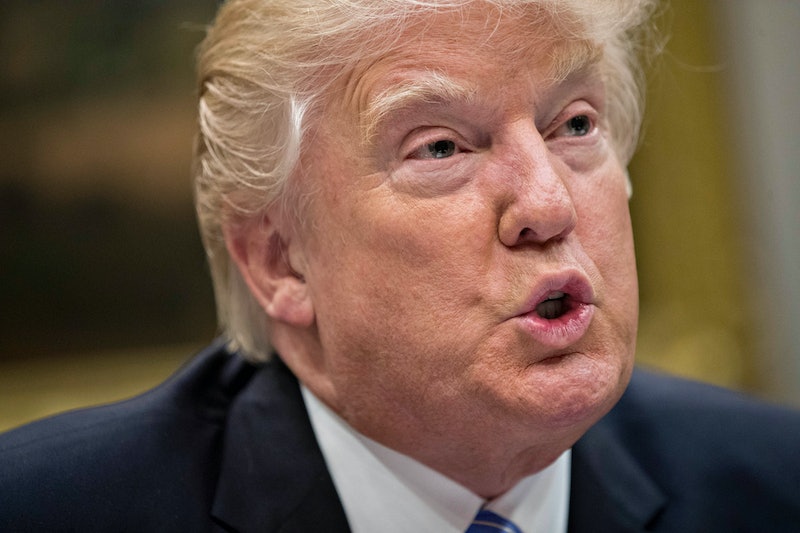 On Thursday afternoon, President Trump gave a notably chaotic press conference that began as a way to introduce his new Secretary of Labor pick, Alexander Acosta, but quickly turned into a series of criticisms of the media, accusations regarding alleged government leaks, and difficult-to-parse lines like “The leaks are real...You know what they said, you saw it and the leaks are absolutely real. The news is fake because so much of the news is fake.”

In the press conference's wake, it seemed like there was only one word that cultural observers thought captured its essence: "crazy." And the calls of "crazy" weren't strictly partisan —Fox News' Shepard Smith referred to the press conference as "absolutely crazy," while Seth Meyers pegged it as "batsh*it crazy," and numerous headlines described the event as "insane," "crazy," or both.

Many of these instances use the word "crazy" to mean "unbelievable," rather than to imply that Trump is specifically suffering from a mental illness. But it feels impossible to separate all the "crazy" headlines from the fact that analyzing Trump's actions as an end-result of a mental illness — and speculating about what exactly that mental illness is — has been a national obsession since well before the inauguration. Several Democratic leaders have spoken publicly about their belief that Trump is mentally ill, with Rep. Ted Lieu going so far as to file a bill to require a psychiatrist at the White House (Lieu told the Huffington Post, “I’m looking at it from the perspective of, if there are questions about the mental health of the president of the United States, what may be the best way to get the president treatment?”) A Change.org petition called "Mental Health Professionals Declare Trump is Mentally Ill And Must Be Removed," which reads "We, the undersigned mental health professionals...believe in our professional judgment that Donald Trump manifests a serious mental illness that renders him psychologically incapable of competently discharging the duties of President of the United States," has over 24,000 signatures. Analyses of Trump's behavior through a mental health lens are as omnipresent in the media as "tiny hands" gags.

A number of mental health professionals have come out recently against this line of thinking, as well. Richard A. Friedman, a professor of clinical psychiatry and the director of the psychopharmacology clinic at the Weill Cornell Medical College, wrote in the New York Times that "Not all misbehavior reflects psychopathology...We should not be in the business of medicalizing bad actors." Similarly, Dr. Allen Frances, professor emeritus of psychiatry and behavioral sciences at Duke University Medical College and a member of the task force that penned mental health diagnosis bible DSM IV, told the Boston Herald, “Trump represents a political challenge to the American democracy...To attribute this to his psychological quirks is to underestimate the danger.” But these kinds of expert commentaries seem to have done little change the national conversation.

When people call Trump "crazy," they're probably not consciously trying to stigmatize people with mental health issues —they may just be expressing and trying to make sense of their own fear. But does that make calling Trump "crazy" harmless, and any criticism of those words simply PC language policing? Or can classifying controversial political moves as "mentally ill" have a negative real-world impact on people living with mental illness — and prevent us from having more productive conversations not just about Trump, but about how his administration makes us feel?

Theresa Nguyen, LCSW and Vice President of Policy and Programs at Mental Health America, told me that the urge to label Trump as "mentally ill" reflects a common human tendency — "whenever a group sees a behavior that is different than what they might think is a normal response, [they'll often] want to turn towards [regarding it as] 'mental illness." She also noted that "people are more likely to use labels when they're angry."

Erika Martinez, Psy. D., isn't just a licensed psychologist — she also taught college-level political science courses for nearly a decade, so she brings a background in American political history to her understanding of how people discuss Trump. In fact, she's written recently on anxiety, history and the current political environment. When I asked Martinez if she thinks the Trump mental illness conversation is further stigmatizing mental illness and the people who deal with it, she tells me, "I don't think — I know. When you stigmatize one person for their mental illness, you run the risk of stigmatizing other people."

Similarly, Nguyen told me, "Any time we use these words, it does make it much more difficult for people struggling with these issues to reach out [and get help]."

Martinez also noted tha labelling Trump (or anyone else we disagree with) as crazy, and thus unfit to hold their job, is discriminatory, as a lot of people living with mental illnesses are able to do their jobs just fine: "who are we to say that because someone is depressed, or has impulse issues, that they can't do a good job?" The office of the president, in fact, has probably been held by a number of men with mental health issues; as Friedman noted in the New York Times, many presidents — including Abraham Lincoln, who is now widely considered to be our greatest president — have likely struggled with mental health issues.

So how do we talk with friends or family who seem fixated on talking about Trump in terms of mental illness?

Nguyen recognizes that it can be hard to just tell someone that you don't appreciate their use of the word "crazy" to describe Trump or anyone else, so she suggests "listening to what is at the root of what that person is saying" and responding to that; later on, "when the time is right, you can come back to that person" and tell them that "When I hear words like crazy...I'm really bothered by it."

Martinez suggests that focusing on history can help keep conversations with fearful family and friends on track, and help people feel more informed, rather than defaulting to labels like "crazy." She points out that our country has dealt with incredibly divisive politicians before, and that many families stopped speaking to each other over the election of Abraham Lincoln, for example. "If you know your history," says Martinez, "it makes what is happening in the news look less scary." She suggests that understanding how history, law, and the Constitution work together can help "mitigate the anxiety and fear" that makes many people reflexively default to labels.

And what if, when you ask to keep the conversation away from the word "crazy," you're accused of defending Trump? Martinez says that you shouldn't take those reactions personally — "Don't let people like that trigger you; that's their sh*t, not yours." She suggests telling them that you're not defending, but trying to keep the conversation focused on the facts — and "if they're not willing to do that, then maybe they're not someone you should be having that discussion with."

We're not going to be able to stop having discussions about Trump any time soon. So we owe it to ourselves — as well as all the people openly and silently struggling with mental illness in this country — to find a way to talk about him that focuses on his specific actions, rather than disparaging an enormous and broad group. We're not going to find any satisfying answers in accusing Trump of having a mental illness — and we're also not going to find any ways to move forward.

More like this
Wimbledon Alters All-White Kit Rule Amid Candid Period Discussions
By Catharina Cheung and Rachel Mantock
The 5 Best Pillows For Acid Reflux, According To A Sleep Expert
By Maria Cassano
The 10 Memes That Defined 2022
By Alexis Morillo
Here's How To Support Jewish People Amid Rising Antisemitism
By Hannah Orenstein
Get Even More From Bustle — Sign Up For The Newsletter