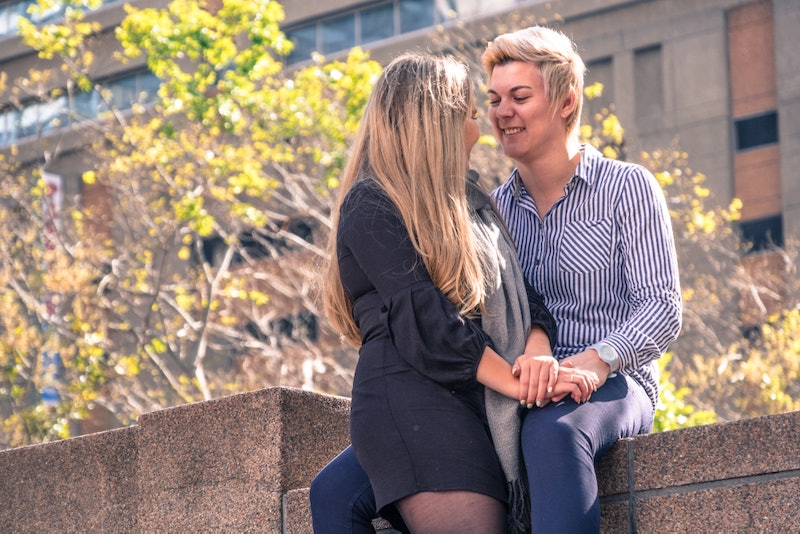 Ah, the plus one. You might have had the experience of things taking a turn towards serious-town with your partner not too long before one of your best friends’ weddings — and you want them to meet the whole crew. Or maybe you simply want to bring a friend along for some extended travel when you’re headed to a destination wedding. The problem? You didn’t get a plus one to the big event. It’s hard to know the etiquette when such occasions arise, but whether or not it’s rude to ask for a plus one to a wedding might depend on the circumstance.

But as etiquette coach Toni Dupree, who runs an etiquette training and coaching company based in Houston, tells Bustle, when it comes to a couple and their wedding guest list, proceed with caution.

"If you are a great friend of the beautiful couple to be, please don’t make the mistake in thinking that things will be different and you can just bring a plus one," Dupree says. "When it comes to the wedding day, how well you know someone doesn’t mean you are are welcome to take liberties."

To clarify, if your wedding invitation doesn’t specify “plus one” that means you are definitely not cleared for someone to come with you.

"Pressing the issue may cause strife," Dupree says, but there is a time and place to double check and ask for permission. Just make sure it's long in advance of the big day. "If when you received your invitation and immediately called asking to be cleared to bring a plus one that is totally acceptable."

More than anything, Dupree says that a general rule of thumb is to always consider your timing, try to bring a solution to the problem —like offering to pay for your plus one's plate — and to just be considerate first and foremost.

Wedding planner Jamie Chang, who teaches couples to mostly plan weddings on their own, tells Bustle essentially the same: that it is pretty much always rude to ask for a plus one when you weren’t given one to start.

"The couple has worked hard to create their guest list based on their budget and wedding," Chang says. "They’ve thought about plus ones and made a conscious decision on how they are handling it. To ask for one not only causes trouble and makes it hard on them, but puts them in a situation that forces them to say no or to let you have one and not others."

The only situation where it might be understandable, Chang says, is if there is a need, not a want. As in, there is no other possible solution if you want to attend their event.

"For example, you’re elderly and need a caretaker to help you move around, get you food, or monitor your meds," Chang says. "Or you’re a newly single dad and your kid just won't go to anyone else."

In other words, it's totally fine for you to ask if your attendance is contingent on the plus one attending with you.

But listen, not everyone thinks asking for a plus one is the hugest social faux pas known to humanity. Wedding planner Katherine Frost, who runs an event planning service out of Denver, tells Bustle that if a guest receives a single invitation without a plus one, it is likely for budgeting reasons, so yes, generally back off from asking for extras. Frost says that one example of an OK ask is when it comes to family situations.

"It can happen that a guest has to choose between going to a wedding and spending time with a family member they rarely see, and who can only come to town the same day as the wedding," Frost says. In this case, the guest is trying to tell you that you rank up there with their family and they don't want to have to choose between you.

Her other thought for an OK plus one ask? When it could be personally or professionally beneficial for the couple. That one is ultimately up to your good judgment and discretion, but do be careful as to what you think is "beneficial" for them. It is, after all, a day all about the couple. The most important thing will always be that you show up for them with love and respect! Plus one or not, as long as you bring some tissues for touching moments and a nice pair of dancing shoes, you'll be sure to have a blast.