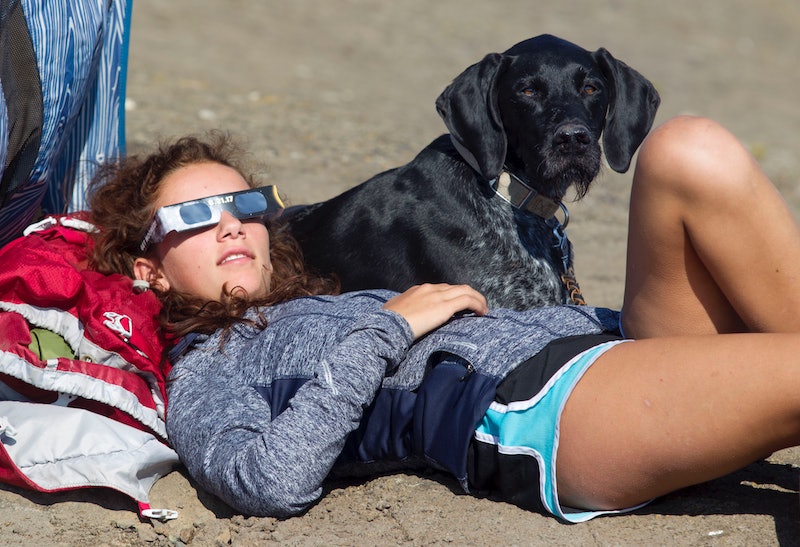 You can join a live stream to watch the eclipse and participate in a super new moon, solar eclipse manifestation ceremony. The cost? $11.11. Because the August 2018 partial solar eclipse falls on the 11th day of the month in a year that adds up to 11 (2+0+1+8=11), the #81118 eclipse occurs near the 11:11 portal, a cosmic gate to spiritual awakening. You won't need your glasses for the live stream, which you can also watch for free on YouTube.

Because the earth is moving, eclipses aren't visible to everyone at the same time, and much of the time they are only visible in certain hemispheres because the earth is facing away from the sun in some areas when the eclipse occurs. "The moon casts a circular shadow onto the earth, but because the moon is much smaller than the earth, the shadow doesn't cover the whole planet," the website In The Sky explained. "Over time, the shadow sweeps across the earth, so that different places see the eclipse at different times."

If your summer vacay is taking you to an eclipse-viewing location, don't forget your eclipse glasses. "To safely observe the sun or watch an eclipse, you need special protective eyewear or eclipse glasses. Basic sunglasses, even those with UV protection, will not sufficiently protect your eyes," SPACE.com explained.

"If you're planning to document the eclipse with any photo equipment, there are special solar filters you can add to make sure the remaining ring of sunlight doesn't take a toll on your vision." Basically, don't take your cue for eclipse watching from our president, who was famously snapped looking directly at the total solar eclipse last summer sans protective eyewear.

Unless you're traveling in the path of a solar eclipse, the next chance you'll have to see one in the U.S. is when an annular solar eclipse (when the moon covers the center of the sun and creates what looks like a ring of fire) will be visible on Oct. 14, 2023. A total solar eclipse follows on April 8, 2024. Of course these eclipse-viewing dates are both contingent on the zombie apocalypse not happening before then. If humans are done in by zombies, take comfort in the knowledge that you did get to view the Great American Eclipse of 2017.

However, if you can hold off the zombies, and you're not planning on viewing another eclipse in person until 2023, it's totally safe to watch all of the upcoming eclipses online without any protective eyewear. On the other hand, if you do happen upon an eclipse, perhaps after winning a free cruise to Antarctica, remember that whether it's annular, partial, or total, looking directly at a solar eclipse without taking proper precautions can damage your eyes. Another reported side effect is inappropriate tweeting. Seriously, don't take any chances. #TheMoreYouKnow