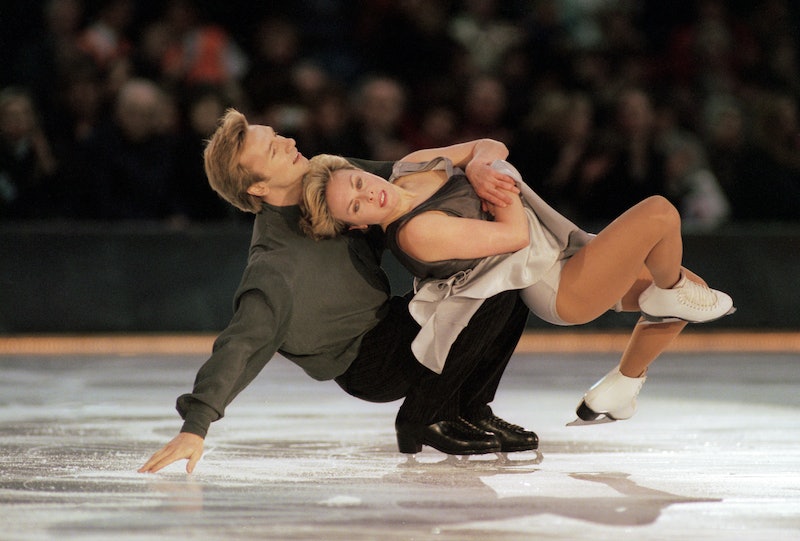 Brits really love their ice skating. Each winter artificial ice rinks go up outside historical landmarks and in town centres across the country, and the countdown to Dancing on Ice begins. Last year's wintry months were dedicated to figure skating legend Tonya Harding, as a prestigious film was released and got everyone talking about the sport again. This year Brits can look forward to a brand new skating drama — but is Torvill & Dean a true story?

The short answer is yes. Radio Times announced the one-off drama which centres on two of Britain's most iconic real life sporting figures — Torvill and Dean — on Dec. 20. Airing on Christmas Day on ITV1 at 9.15 p.m., with a meaty two hour runtime, they report, you'll get a real glimpse into the people who made the Boléro routine famous.

But how much of Torvill and Dean's real story is told? Well, quite a lot actually. According to the Radio Times, the former Winter Olympics stars acted as consultants for the biopic, reportedly granting the show's screenwriter William Ivory many hours of interview time so as to ensure the biopic's accuracy and precision.

"We have thoroughly enjoyed the time we have spent with William Ivory," the pair said in a joint statement for ITV. As the broadcaster revealed back in July, the biopic will follow the couple from their humble beginnings in Nottingham, showing how figure skating became an outlet for their frustrations and griefs as young adults, right through to their Gold Medal win at the 1984 Winter Olympics.

Emily Dalton, the biopic's executive producer spoke about th"we've all speculated about their relationship off the ice. I think viewers will be moved and surprised by the heart-breaking - and backbreaking- journey they've been on together." As, according to The Telegraph, their Gold Medal winning routine racked up 24 million viewers, and their legacy lives on in the form of Dancing on Ice, it's likely that many millions of viewers will be tuning in to watch the biopic come Christmas Day.

The cast of the show looks seriously strong too. Game of Thrones' Will Tudor will be playing Dean, while My Cousin Rachel's Poppy Lee Friar takes up the role of Torvill. As The Mirror reported on Dec. 19, the actors met with the real life Torvill and Dean ahead of airing, and apparently, they even gave Tudor and Friar some skating lessons over FaceTime. "What was great was how even though they're on separate lines they were still finishing each other's sentences in completely different countries," Will said of the couple.

The IRL Torvill and Dean did admit that it was pretty strange seeing the actors portray them, they told Lorraine on Dec. 18, the Daily Mail reports. "It's strange to watch, you have your memories of that time and to see other people portray it is weird," Torvill allegedly said. While strange for them, I reckon it'll be a pretty emotional watch for viewers up and down the country.