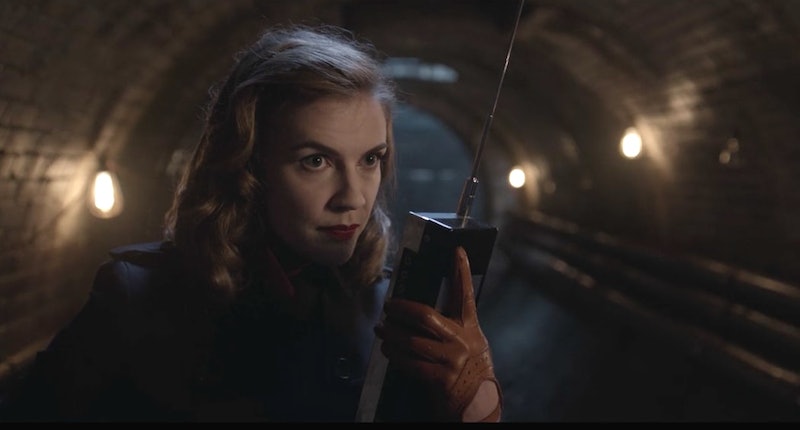 If you're like me, watching Netflix's A Series Of Unfortunate Events might compel you to revisit the original Lemony Snicket books, both for nostalgic purposes and to resolve some questions. After meeting Mr. Poe's mysterious assistant in "A Bad Beginning," I had to turn to the book series to answer the question: is Jacquelyn in the Series of Unfortunate Events books? Played by Sara Canning, the character is one of the only helpful adults in the new series, a marked contrast to the many inept and villainous grownups the three Baudelaire orphans can't seem to escape. Spoilers ahead for those who have not watched the new Netflix series!

Those who, like me, think their memory might be deceiving them should take comfort; there is no character named Jacquelyn in the Series of Unfortunate Events books, and her character appears to be an invention of the Netflix series. While her behavior echoes other comforting characters throughout the book series, her plots and basic details are original to the Netflix show. The Netflix adaptation stays very close to the humor, aesthetic, and darkness of the original Lemony Snicket series, but Jacquelyn is definitely a newcomer, unless she ends up having a secret identity, which would not surprise anyone familiar with the series.

Jacquelyn first appears as the assistant to incompetent banker Mr. Poe in the second half of the first installment of the Netflix show, "A Bad Beginning." She is later revealed to be part of the same secret organization as the Baudelaire parents, and she helps Gustav Sebald get the Baudelaire children to their benevolent Uncle Monty's care. She also appears to have some kind of history with Count Olaf, though they definitely do not have a friendly relationship.

Why add a new character to a series that is certainly not lacking in characters? My guess is that Jacquelyn exists as a composite of the rare benevolent adults in the books, a guardian angel figure meant to alleviate the darkness and loneliness of the Baudelaire orphans' story. I found the Netflix series to be slightly lighter in tone than its source material and its film adaptation, with the lovable Neil Patrick Harris playing a slightly less sinister Count Olaf. Jacquelyn could be the remedy to one of the darkest truths of the books: the enduring disappointment of the adult world. No matter where the Baudelaires turn, they meet adults who are incompetent, unduly patronizing, or downright evil. Jacquelyn, a character who has their back throughout the first season, is a ray of hope and goodness, both for the Baudelaires and for viewers young and old who want to believe there are some responsible adults out there.

More like this
Jessica Simpson On The Time She Was Pursued By A Backstreet Boy & An *NSYNC Member
By The Editors
Your Guide To Watching 'Everything Everywhere All At Once' In The UK
By El Hunt and Sophie McEvoy
Alicia Silverstone Revives Her 'Clueless' Character In This Super Bowl Commercial
By Jake Viswanath
Rupert Grint Just Shared A *Major* Update About Ron Weasley’s Future
By El Hunt
Get Even More From Bustle — Sign Up For The Newsletter
From hair trends to relationship advice, our daily newsletter has everything you need to sound like a person who’s on TikTok, even if you aren’t.