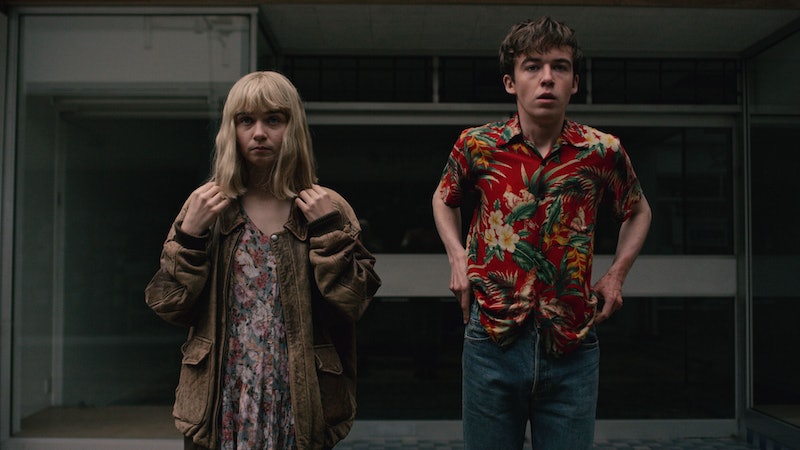 In this new teaser for the dark yet heartwarming series, James is spotted looking very bloody on the beach as Alyssa cries over his body. But that's the only time James shows up in this trailer. This first look of Season 2, which starts streaming on Netflix on Nov. 5, is focused on Alyssa as she attempts to start again after their road trip gone terribly wrong. She's flipping burgers and trying on white dresses — hence Graham Coxon's cover of "White Wedding" in the trailer — all while looking rather despondent.

The tagline for the new season states, "You can't escape from yourself" and it appears this is true for Alyssa who seems to be facing a lonely existence sans James, who planned to kill her. But, is James actually dead, or just dead to her?

There are small clues throughout the trailer that James is gone for good like Alyssa looking in the bathroom mirror as bloody water drains from the sink. But, perhaps the most meaningful shot is that final one of the lone bullet inscribed with James' name, a depressing sign that Alyssa isn't long for this world.

While she might be chasing herself, Alyssa also can't seem to escape from Bonnie, a new character played by Naomi Ackie (Star Wars: Episode IX), who has a mysterious connection to Alyssa. Like her, Bonnie is an outsider with a troubled past of her own and she's got her eyes on Alyssa. Throughout, Bonnie is spotted following her, but as to why she's on Alyssa's tail, that's another mystery.

In the year since The End Of The F***ing World was officially renewed for Season 2, the show's writer Charlie Covell has chosen to stay mum about this new season. Her only comment coming in a statement following the renewal announcement. "After a shocking series finale, only one thing is certain," she wrote in a statement from Channel 4, the UK network that airs the series. "Expect the unexpected."

In that case, fans might want to assume that whatever they think happened to James at the end of the first season might be very, very wrong.

More like this
'The Crown' Season 6 Has Suspended Filming "Out Of Respect" For The Queen's Death
By Bustle Staff
Netflix Shut Down 'Bridgerton' S3 Rumours About A “Very Dark” Storyline
By Bustle
Everything To Know About A Potential 'Lockwood & Co.' Season 2
By Gretchen Smail
Everything To Know About 'Cobra Kai' Season 6
By Brad Witter
Get Even More From Bustle — Sign Up For The Newsletter
From hair trends to relationship advice, our daily newsletter has everything you need to sound like a person who’s on TikTok, even if you aren’t.