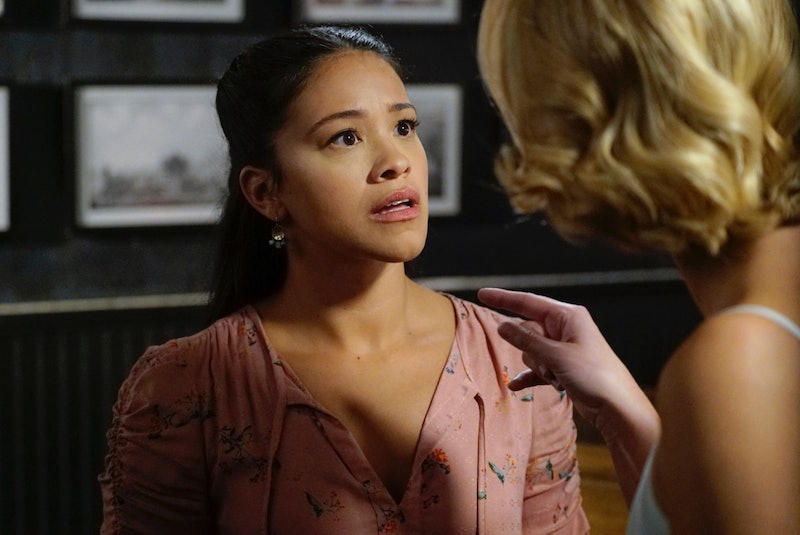 Jane Gloriana Villanueva is a devoted mother, daughter, granddaughter, writer, and... narrator? Over the course Jane the Virgin's five seasons, the narrator has revealed small pieces of information about himself, and fans have tried to figure out who he — or she — could be. In fact, one of the leading fan theories out there is that although the voice sounds male, the Jane the Virgin narrator could be Jane herself. Back in 2017, creator Jennie Snyder Urman did reveal that audiences would learn the true identity of the narrator by the end of the series, so it makes sense that it would be someone they know well.

Another one of the most popular theories is that little Mateo could be Jane the Virgin's narrator. This one carries a lot of clout, too, but Anthony Mendez, the actor that actually voices the narrator, suggested that there's one major flaw in this theory that could bring the whole thing crashing down. Talking to TV Guide, Mendez explained that the narrator speaks with an accent — and Mateo doesn't have one.

"Here's my thing about that theory: As generations of Latinos in this country go on, they lose the accent. So unless he was abroad for awhile, that's going to be interesting. But it could happen. Either it's going to be one of two extremes: Either he's so tied into this that people will be like, 'Oh, my God!' or he's just the guy who hands out the parking valet tickets at the hotel."

Mendez's note about the accent does take a little bit of the air out of the tires of the Mateo theory. Going off of that, though, why not just suspend the idea of the voice being a clue, and stop for a minute to consider that this could have been Jane's narration all along.

It's Someone Very Close To The Villanuevas

At Xiomara and Rogelio's wedding in the Season 3 finale, the narrator says, "And Xiomara? Well, she looked perfect. At least to the people who loved her most — which includes me." Jane would definitely count as one of the people that loved her mother most.

Clearl Mendez sounds like a man. However, just because the voice of the narrator is masculine doesn't necessarily mean the story is being told by a man. After all, Digital Spy's Abby Robinson points out that Gossip Girl was famously narrated by the voice of Kristen Bell, despite the fact that "she" wound up being a male character in the end. It's possible that Jane is narrating her own story, perhaps by writing a book or script with a male narrator in order to throw off suspicion.

She's Already Got The Wording

Slate also points out that Jane has already written the phrase, "Our story begins thirteen and a half years ago," which is the exact same phrase that the narrator uses to begin Chapter One. Coincidence?? Besides, who else likes to talk as much as Jane?

It's Her Dream Project

In the Season 4 finale, Jane gets the inspiration to combine different parts of the stories she was writing to create one, big, super story. Jane the Virgin is definitely an amalgam of not just Jane's stories, but Xo and Alba's as well. It would be her magnum opus.

All this evidence does seem to indicate that Jane is definitely a contender for Jane the Virgin's narrator. The only major drawback is that it might be just too darn obvious for a show that loves its dramatic twists as much as this one.