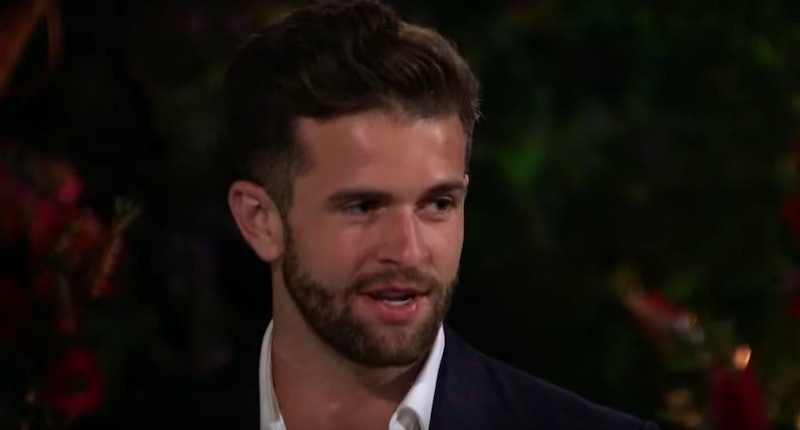 Jed is a clear frontrunner on Hannah's season of The Bachelorette, but he doesn't have it on lock just yet. She seems super into him, but there's also Tyler C., Peter, and inexplicably, Luke P. to think about. So it's still a real possibility that Jed is single after The Bachelorette, and that he doesn't end up winning Hannah's final rose. Of course, he's not going to spoil the ending ahead of time, but that doesn't mean we can't wildly speculate until we get solid answers!

As of right now, Jed and Hannah seem completely smitten with each other. Hannah even told Jed last week that she was falling in love with him — something she's yet to say to anyone else. Jed's also officially made it to hometown week, and Hannah's about to meet the people who might become her future in-laws. So the two are certainly at a strong point in their relationship.

That being said, hometowns can be unpredictable. Given how serious the competition is becoming, even a frontrunner like Jed can be sent home at a moment's notice. Hannah has big decisions to make, and at this point, she's connecting with all the remaining guys. So, what's the deal? Are her and Jed still together? Is he single? Is he dating someone else?

According to his Instagram, all we can confirm is that Jed is in a very serious relationship with his guitar. He's sharing plenty of memories from his time on the show, and he even wrote a funny song about that salmon jacket all the men seem to be sharing this season. He's also posted several sweet messages about Hannah, but naturally, no details that hint at where their relationship stands now. If you know anything about the Bachelor/ette, that's not surprising: contestants are under strict contracts and can't reveal any insider details.

Of course, if you've been keeping up with Bachelorette gossip offscreen, you know there's another factor to consider when wondering if Jed is single — even if he does get Hannah's final rose. On June 18, People published a report in which aspiring musician Haley Stevens claimed Jed was still dating her when he went on the show, and that they planned to reunite after he got back and had gained some exposure for his music career. Bustle reached out to Jed for comment, but has not yet heard back. Jed did, however, address his Bachelorette controversy on Instagram, writing:

If Hannah did choose Jed at the end, the reports must have been a difficult thing for them to face as a couple. Hannah has already had her fair share of drama this season — that last thing she probably wants is more, even if it is just rumors.

All of which is to say that if Jed isn't single after The Bachelorette, whether he's with Hannah or someone else, he's likely having to navigate some treacherous waters right now.