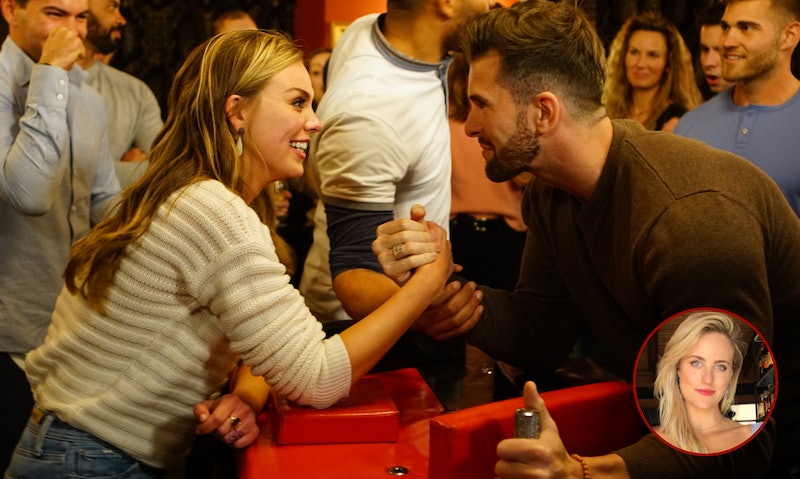 While competing on Arie Luyendyk Jr.'s Bachelor season and Season 5 of Bachelor in Paradise, Kendall Long experienced love and heartbreak on national television. Now that she's been through it all, she has plenty of words of wisdom for new contestants, and she's dishing all to Bustle. Read what Kendall has to say about Jed's intentions dating Hannah on The Bachelorette and more in this week's recap.

Can you believe we're one week away from hometowns? It really sneaked up on me this season, and I think a lot of the cast is feeling the same way. I agree with many of the men that a lot of relationships this season have been stunted due to the distraction of Luke P. sucking up precious time, making an already expedited experience feel even more so. But everyone must move forward!

Hannah greets the remaining men at an Amsterdam café, where she whisks Jed away for a one-on-one date. I heard one of the guys say, “He didn’t bring his guitar, did he?,” which leads me to believe that there is a little suspicion among the guys about his motives. I can’t say everyone else in Bachelor Nation doesn’t feel the same way. It’s hard to ignore the news that Jed allegedly had a girlfriend back home while filming the show. Though on this season Jed does appear to be a stand-up guy, his own admission about coming on The Bachelorette to boost his music career, coupled with People's reporting on his alleged girlfriend back home, suggests he might have a lot of explaining to do when this is all over.

As I was watching Hannah and Jed exploring Amsterdam and clicking their heels together, I couldn’t help wondering, if Jed does have a lady waiting at home, does this technically count as cheating? This thought became even more prevalent after Hannah revealed that she's falling in love with him.

Jed’s shocked reaction is paired with the comment, “My heart just fell through the Earth,” which could be interpreted in many ways. I really don’t want to believe rumors, but in this instance, if they are true, then Jed in some ways is a cheater either to Hannah or to the girlfriend back home. His feelings may be real, but that doesn’t excuse his lie to another woman who is probably waiting faithfully for his return. Plus, seeing that Jed will be here next week for hometowns, his family is now getting involved! Do they know about his intentions to go on The Bachelorette for musical fame? Do they know about the supposed girlfriend?!

As of now, I’ll try to give him the benefit of the doubt, because he can't defend himself fully yet, but once this Bachelorette bubble pops, there will be a lot of people asking questions.

On a more positive note, Hannah does seem to be putting her heart out there more, which will hopefully bring her peace with the decisions she has to make this week. With Tyler getting the next one-on-one, we can really start to see the front-runners. The date starts off with a few fears: One is horses, two is pickled herring, and three is vulnerability. Seeing that Tyler both conquered the fear of horseback riding while trying to simultaneously eat the less than desirable fishy snack, it's only fitting that he's able to open up as well, and Hannah seems eager to get to the nitty-gritty of what makes Tyler tick. Tyler expresses a bit of hesitation on the day portion of the date, which leaves Hannah searching for more. Thankfully, Tyler opens up about his family and parents' divorce, giving the two time to connect on the less physical side of their relationship. Tyler also reveals that he is “falling hard” for Hannah and can see himself potentially getting down on one knee! Two hometowns down and two to go!

The next date card is given to Mike. With two successful one-on-one dates, Mike has high hopes that he'll have good luck, too. But before we get to Mike’s moment of truth, Connor decides to go off script and give Hannah a surprise visit. This far into the season, a sneaky visit can mean one of two things: either he is guaranteed a rose and gets to go to hometowns, or this is where he says his goodbyes.

A little-known fact: I actually sneaked into Arie's room at this exact moment in my season! Right before the three-on-one with Tia and Bekah, I was stressing out about not having any time before hometowns too and felt my relationship wasn’t as advanced as a lot of others in the house, so I can relate to Connor’s frustrations. It turned out that my surprise visit didn’t send me packing and also gave me confidence going into the three-on-one (which is probably why it was never aired). Connor’s visit proves just the opposite and he's sent home; Hannah won't be meeting his family.

With one goodbye already this week, Mike’s upcoming one-on-one already has me a bit worried. The date card revealed, “Mike, I’m drawn to you,” which naturally means there will be art! Mike and Hannah put their art skills to the test before becoming the subjects of an art piece themselves. Wrapped in silky robes, the two lounge on a couch to be painted like one of Leo DiCaprio’s French girls.

After their impressive art modeling, though, Hannah is experiencing looming doubts. She confesses in her interview that if Mike did go to hometowns, she would have trouble telling his family how she felt about him, which doesn’t seem like good news going into the night portion of the date. The artwork at the next location seems to strike Hannah in a deep emotional way and she is full of tears even before Mike exits the really cool clear elevator. As the night progresses, Hannah regretfully admits that she can’t give him a rose.

“I don’t know what to say besides thank you for being honest,” Mike says, remaining a gentleman to the very end. We love you, Mike!

Back at home base with the other men, it's obvious Luke is the odd man out when he says, “Seeing someone take that suitcase would make my day,” and is met with a sea of criticism.

Tyler makes a comment about Luke being a “5'8" villain.” I am just as tired of Luke's antics as anyone else, but a lot of what is happening on this show borders on bullying. Luke is a hot-tempered guy with a lot of ego, so can be riled up easily. I see a lot of the men take advantage of this, which disappoints me a bit. Jed even gets in a jab the morning of the group date, saying something about Luke needing to get his head out of his butt. It's a very disappointing and unnecessary comment aimed at someone who already is taking a big beating from the others.

With that, Peter, Luke, and Garrett set off on a group date that is bound to do a bit more feather ruffling. First to steal Hannah away is Luke, who expresses his frustration with the other men’s actions toward him, commenting on both Jed and Garrett’s rude comments.

I have to agree that the other men are exhibiting a very strong mob mentality. No one in the group wants to be associated with the “villain” or ostracized individual lest they themselves risk being ostracized, so they gang up with the group and pick on Luke in order to find safety in numbers. Unfortunately for Luke and villains before him like Krystal on my season, it’s a basic human instinct. Approaching a situation with empathy is more difficult to do, but says a lot about someone’s character.

It’s no surprise that Hannah brings up her conversation with Luke to Garrett, who is less than surprised himself at this point. It doesn’t take long for Garrett to confront Luke, starting the conversation off with, “I saw the look on her face and your time is coming to an end.”

I’m pretty exhausted with Luke’s predictability in throwing the other men under the bus, but I am even more tired of Garrett's constant provocations. However, Garrett pointing two gun hands at Luke did provide some comic relief. I mean, can we get more comedic yet childish banter between these two guys? Luke even throws a stack of meat at Garrett while exclaiming, “That’s bologna.” Leave the lunch meat out of it, you two!

Luke tries to commiserate with Peter, the only guy left who hasn’t fallen into the bullying cycle, but he quickly removes himself from the incident and chooses to focus only on Hannah instead of coaxing the flame.

We take a break from the childish banter to finally bask in some romance. Peter and Hannah have obviously gotten a lot closer since their one-on-one, and Hannah seems relieved that their relationship isn’t being derailed by the Luke drama. Peter seems over the moon after Hannah gives him the group date rose. Back inside, however, tensions are rising as Garrett continues to poke the bear by winking at Luke and making a few backhanded comments like, “Are you licking your lips because you’re attracted to me?”

I, for one, found myself hoping Garrett would go home at this point, because his rivalry with Luke has gotten pretty ugly. And as Luke takes another moment with Hannah, I get my wish. Despite the drama and bullying, Luke and Hannah do have a connection on many different levels, one of those being their shared faith.

Luke explains how he used to have difficulty with partying and drinking and how a godly intervention in the shower has since led him on the path of righteousness. I do commend him for admitting he isn’t perfect; it's one of the few times we see him admitting to anything less than perfection in himself. At the end of their chat, Hannah confesses in an interview that she’s “connected to him,” and Luke seems to agree, saying, “she’s falling in love with me for sure… It’s like I know.”

Maybe foreshadowing a little bit of humble pie coming Garrett’s way? The men at the house seem to think Luke's reign is coming to an end, and Garrett makes a bold move by telling Hannah that he is indeed in love with her. While his words are strong, I do feel like they are a bit premature, and Hannah feels a bit of a disconnect with him. Is Garrett really in love with Hannah, or is he focused on not wanting to lose to Luke? Ultimately, Hannah says she has to go where her heart is leading her. And her heart says... Luke is going to hometowns!

Oh, how the mighty have fallen, Garrett! This had to have been the most cringe-worthy helping of humble pie ever received in Bachelorette history. If Garrett had been a nicer guy, I would have been more upset during this moment, but unfortunately he took the cocky route, so public humiliation it is.

Seeing the sneak peek into next week, it looks like there is a bit of hanky-panky and a bit of a religious intervention. Will this be the perfect recipe for Luke to finally go home? It’s got me at the edge of my seat and ready for next week!