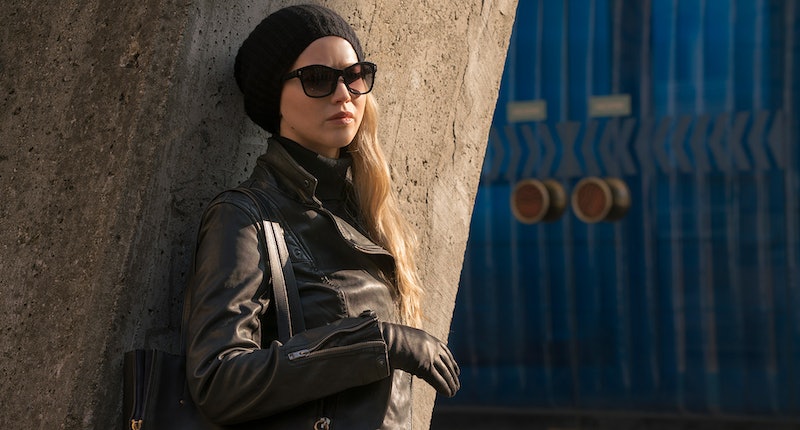 In the new spy movie Red Sparrow, Jennifer Lawrence portrays Dominika Egorova, codenamed DIVA. She's a special breed of Russian spy known as a sparrow who uses her sexuality and seductive skills in order to compromise potential targets. The film is very timely given the ongoing investigation into the efforts of the Russian intelligence community to hack the 2016 U.S. presidential election, but how much of Red Sparrow is inspired by reality? Is Jennifer Lawrence in Red Sparrow based on a real agent, or is she nothing more than the Russian female equivalent of James Bond — in other words, a completely fictional character?

Lawrence's character in the film is not based on any actual agent as far as anyone knows. She is a fictional character created by author Jason Matthews, who wrote the 2013 novel of the same name upon which the film Red Sparrow is based. However, that's not the whole story. While the character of Dominika Egorova may not be based on any particular secret agent, the sparrows in the book and movie are indeed based on an actual spy program that was known to exist in the Soviet Union from at least the 1960s through the 1980s, and one that likely included several agents who were very similar to Lawrence's character.

In the movie, Dominika is a ballerina who is forced into a Russian spy program in order to receive medical help for her ill mother. She is sent to what's called a sparrow school, where she is trained as a spy with the aim of seducing and compromising foreign agents who can later be used as assets in intelligence gathering. But given the way she was forced into becoming a spy/sex object, her loyalties don't necessarily stay close to Mother Russia; especially after she is assigned to compromise a CIA agent for whom she eventually develops feelings. And while this all sounds like typical and fanciful spy fiction, there is some truth buried amongst the sensationalism.

The Soviet Union did indeed have a sparrow school where female agents were trained to be seductresses that could compromise foreign agents. One such successful sparrow operation took place in the 1980s, where a sparrow seduced a U.S. Marine who was stationed at the American embassy in Moscow, and convinced him to allow Russian agents onto the property where they were then presumably able to gather intelligence, according to The New York Times. In the spy community, this type of operation — where an attractive woman is used to seduce a foreign asset — is often referred to as a "honey trap" operation, and they're believed to still be in use throughout the world; including in post-Soviet Russia, where Red Sparrow takes place.

Matthews, the author of Red Sparrow, was a CIA agent for 33 years prior to writing the book, and he based much of the story's tradecraft on the way actual spies conduct their intelligence gathering. And while it's not known if he based Dominika Egorova on any one specific person, it's not out of the realm of possibility. One particularly famous Russian spy who was known for allegedly conducting honeytrap operations is Anna Chapman. Chapman was arrested in New York in 2010 for allegedly being part of a spy ring, and a media frenzy ensued thanks largely to her good looks (she has since gone on to become a model and celebrity in Russia). There was also an accusation, first reported by The Independent, that Chapman was arrested sooner than originally planned because she was very close to gaining access to a member of President Obama's cabinet through a honey trap operation. However, the FBI later disputed that claim, according to Wired.

Lawrence's character in Red Sparrow may not be based on a real agent, but given what we know about the history of Russian spy programs, someone like her could most certainly exist.