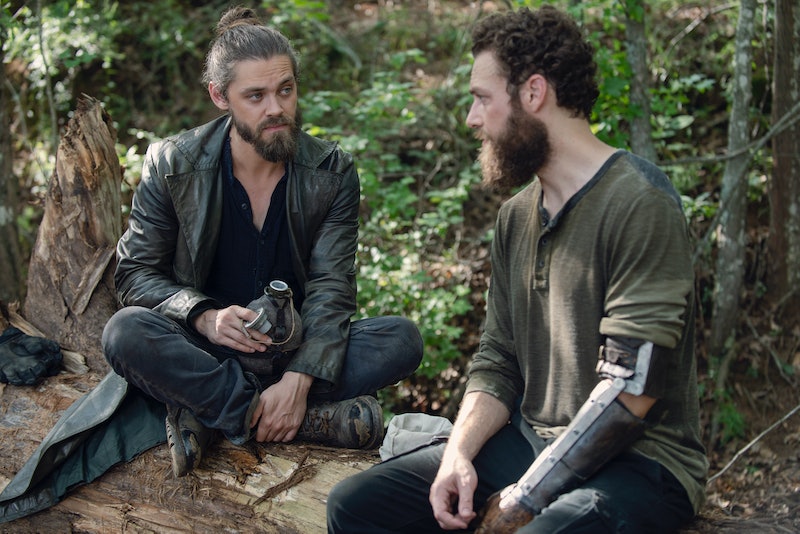 On The Walking Dead, in with the new means out with the old, and the arrival of a whole new group of survivors means someone else has to go.While Maggie and Rick are still out there somewhere in the TWD universe, the major loss of Jesus during the midseason finale hurt even more, if only because it was so unexpected. After fighting with the Whisperers, Jesus' death on The Walking Dead marks the beginning of a new chapter for the series. Having been stabbed in the heart by a Whisperer, Jesus likely won't even make it to the midseason premiere in February for a final breath. In an interview with The Hollywood Reporter, actor Tom Payne said that he had been frustrated by how his character was sidelined in his middle seasons, but was ultimately happy with Jesus' last showdown.

"The whole episode, I had this huge smile on my face. I kept thinking: 'This is so fun. This is what I wanted to be doing!' I felt like Jesus was feeling... Jesus has been cooped up at the Hilltop for two years, and he wants to get out there and do sh*t. It may have gotten him killed in the end! But at least he got into a fight with his sword. The whole episode told such a great story. I was happy to tell that story. This is what the show's about, and I just wanted to be a part of that. You want to be part of the shocking sequences. I ended up being very lucky in the end. I got to introduce you to the Saviors, and now I'm introducing you to the Whisperers. It's a pivotal moment for the show."

In the comics, Paul (Jesus' given name) is still alive. He's also fully in a romantic relationship with Aaron, for all of those hoping that would happen on the series. There is a search party that ends in an early confrontation with the Whisperers, and not only does Jesus survive it in the comics, he captures one of the masked villains (a girl named Lydia who becomes romantically involved with Carl) and interrogates them.

In the series, Jesus will sadly not rise again, Payne may return — or may have already filmed a return — to the role in the remainder of Season 9. The actor teased some kind of flashback situation in an interview with Good Day LA, below:

"There is a six year time jump between Episode 5 and Episode 6 so you maybe might see what happened with Jesus in those six years," Payne said. "As far as this point in the timeline goes, at this point, he's dunzo."

One can only hope there are flashbacks! We don't need to know everything that happened during those six years, but showing is better than telling and some things need to be shown. Why did all of these friendships break up? Why do Michonne and Daryl (and probably some yet to be revealed characters) have X-shaped scars on their back?

So, while Season 9 marked the final nail on the cross for Paul "Jesus" Rovia, it's possible that other parts of his story will be filled in on a later date. Maybe around April, just in time for Easter? It's worth it for puns alone!