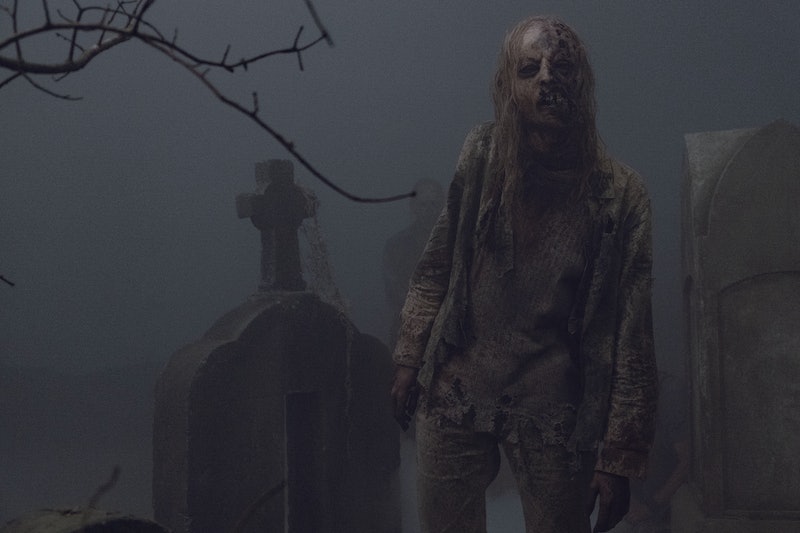 Can you believe that a major Negan escape on The Walking Dead, something that doesn't happen until way later in the comic book source material, was practically an afterthought in Sunday's jam-packed episode? As if that wasn't enough, so many questions are left unanswered, at least one fan favorite is dead, and the survivors got into some seriously scary corners. It's hard to pick just one or two bizarre or shocking moments from The Walking Dead Season 9 midseason finale, so here are a few of them.

The Whisperers have finally arrived on The Walking Dead, though the way this episode went down was maybe not the way that fans may have expected this long awaited group. As the characters on the AMC series discussed the upcoming "fair" among the various outposts, fans might have been reminded of a similar event in the comics. Alpha, the leader of the Whisperers, infiltrates the fair in the books — and it's one of the inciting incidents of the war. However, neither the fair nor Alpha showed up in Sunday's finale.

Instead, the search to rescue Eugene and the efforts to find a home for Magna's group took some twisted, terrifying turns. Here's are just some of them to roll over in your mind until the series returns in February 2019.

1. Negan *Casually* Breaks Out Of Jail

So that just kinda happened, right? Did Gabriel let him out? Did Gabriel just... forget? Negan leaving is cell is a huge deal for the series and nobody has even noticed it yet. That said, in the comics, there is a fakeout with Negan's door being open — so even though we see him reunited with Lucille in the promo for the rest of the season, it may be a while yet before that happens.

Daryl holding up that head mask was chilling, and it's actually kind of cool how the survivors have to figure out what the Whisperers are, right? The fact that the group seriously concerned that walkers have developed the ability to talk is a good way to introduce this new clan.

Unfortunately, it looks like he is. That graveyard fight was something else, though The mist, the twilight blue lighting, and those "talking" zombies. It was so different and so scary.

"You are where you do not belong," the Whisperer who killed Jesus said. What does that mean? Some kind of Whisperer slogan? Add that to the list of mysteries for the series' return in February.

4. The Cabin In The Woods

Why is there a teen drama subplot on The Walking Dead now, and why do teens living in a zombie apocalypse so willingly put themselves in a situation straight out of the most basic horror movies? The fact that they likely haven't seen any movies, given that they grew up after the world fell, hardly seems like an excuse. Also, the fact that Enid seems totally not interested in being a part of "zombie Riverdale" is particularly hilarious, given that she and Carl practically invented it.

After Carol and Ezekiel's adopted son got into moonshine with the other youths of the Hilltop, Earl locked him up for 38 hours and lectured him about the error of his ways. Yes, the same Earl who got wasted (six years ago for him, less than a month for all of us) and tried to murder Maggie. What a role model.

OK, sure, this has been revealed slowly this season, but watching the two interact is still wild.

We still don't know what happened in those six years that is making everyone act so weird around each other. However... Tara is the leader of the Hilltop, especially now that Jesus is dead and she and Michonne apparently still have some weird beef.

This is a lot to mull over. The peaceful world on The Walking Dead was just shattered by multiple threats, not to mention the personal drama between our heroes that apparently can't be solved by hugging it out. Mix that in with zombie face masks and Season 9 just got a whole lot weirder.