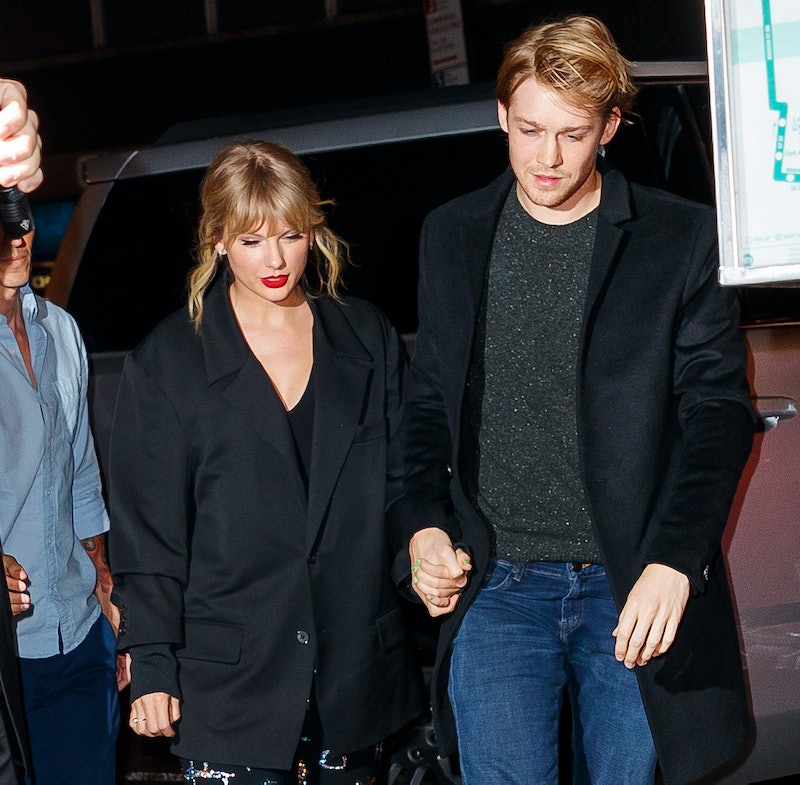 You'd be forgiven for not knowing Taylor Swift's been in a serious relationship for the last three years — the singer's been famously quiet about dating British actor Joe Alwyn (and vice versa on his part). The closest the two have come to appearing near each other in public was sitting next to each other at the 2020 Golden Globes, after arriving separately, as they have at every other red carpet event they've attended. But with new Netflix documentary Miss Americana promising an intimate look at Swift's private life, fans are wondering if the veil of secrecy might finally be lifted. So is Joe Alwyn in Miss Americana? Just barely.

Swift's maintained strict silence on her current relationship, explaining to the Guardian, “I’ve learned that if I do [talk about it], people think it’s up for discussion, and our relationship isn’t up for discussion...It’s just that it goes out into the world. That’s where the boundary is, and that’s where my life has become manageable.” For his part Alwyn feels the same, telling GQ UK that, "Someone’s private life is, by definition, private. No one is obliged to share their personal life.”

Alwyn isn't entirely absent from the doc though. Throughout the film parts of him — his hands, his back, etc. — are in frame. At one point, Swift hugs a tall blonde man in a baseball hat we only see from behind, and gently holds and kisses the hand of an anonymous person as they ride together in a car. While he's never fully in the picture, he's a constant, distant presence. And these moments offer a window into deep intimacy without overtly stating a single private detail.

Swift describes her latest album Lover as "a celebration of love, in all its complexity, coziness, and chaos," while towards the end of the Miss Americana trailer she adds, "I feel really good about not being muzzled anymore, and it was my own doing." And if her relationship with Alwyn is any indiction, Swift is doing things her way.

More like this
Who Is Nick Cannon Dating & How Many Kids Does He Have?
By Jordyn Tilchen and Radhika Menon
Hailey Bieber Just Responded To *That* Viral Met Gala Moment
By Radhika Menon and Sam Ramsden
Adam Devine Hilariously Let Everyone Know He’s *Not* Accused Cheater Adam Levine
By Brad Witter
Lindsay Lohan & Jonathan Bennett Celebrated Mean Girls Day Very Differently
By Jake Viswanath
Get Even More From Bustle — Sign Up For The Newsletter