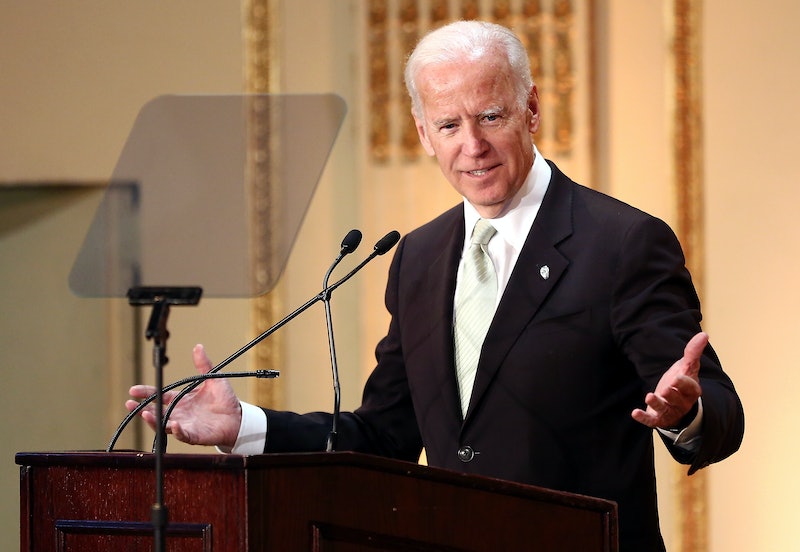 April 29 is a big day for the world of politics. Not only does Saturday mark President Donald Trump's 100th day in office, but it's also the White House Correspondents' Dinner. The current commander-in-chief has already made it perfectly clear that he doesn't plan to attend the event, but what about other politicians? Is Joe Biden at the White House correspondents' dinner?

This WHCD is sure to be a different spectacle than years past. Traditionally, the event is centered on the novelty of having the sitting president share the evening with some of the biggest names in news and entertainment roasting him and the Beltway scene. But in February, Trump announced he would not attend the White House Correspondents' Dinner, saying: "I will not be attending the White House Correspondents' Association Dinner this year. Please wish everyone well and have a great evening!"

But it didn't put a halt to the event altogether — without skipping a beat, the president of the White House Correspondents’ Association, Jeff Mason, responded in a statement:

The White House Correspondents’ Association looks forward to having its annual dinner on April 29. The WHCA takes note of President Donald Trump’s announcement on Twitter that he does not plan to attend the dinner, which has been and will continue to be a celebration of the First Amendment and the important role played by an independent news media in a healthy republic. We look forward to shining a spotlight at the dinner on some of the best political journalism of the past year and recognizing the promising students who represent the next generation of our profession.

Still, this year's White House Correspondents' Dinner is missing some of its big names. In addition to the president, some major media outlets have also decided not to host parties, including Vanity Fair and the New Yorker.

Since ending his two terms as vice president, Biden has focused on a number of other projects, including signing a book deal to write about how he dealt with the death of his son Beau and raising sexual assault awareness on college campuses, recently given a well-praised lecture at George Mason university.

It's all but certain that Biden won't be in attendance this year, now that he won't have the same obligation he had as vice president for eight years. Even back in 2014, Biden was game for joking about being unenthusiastic about the notorious nerd prom.

In a spoof with Julia Louis Dreyfus' character, Selina Meyer, from the critically acclaimed HBO show, Veep, Meyer asks Biden if he's "going to the Snorespondents' dinner" to which the real-life-at-the-time VP said he wouldn't make it that year calling it, "a bunch of politicians trying to explain politics to Hollywood ... it's not worth it."