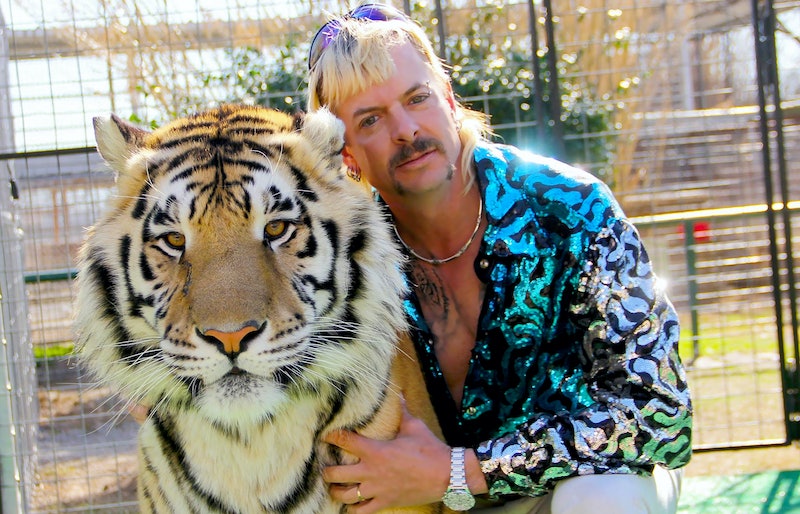 Although the subject of Netflix's Tiger King, Joe Exotic, is serving 22 years in federal prison, the G.W. Zoo is still open for business. As documented in the series, Joe's former colleague, Jeff Lowe, took over the business and changed the name to Greater Wynnewood Animal Park, per the Daily Beast.

However, it won't be open for long. Per the Oklahoman, Lowe is currently building a new location for the zoo in Thackerville (behind the WinStar Casino, as its Instagram and website explain), which will be called the Oklahoma Zoo. The new location should not be confused with the Oklahoma City Zoo, however, which has been accredited by the Association of Zoos & Aquariums.

Lowe announced that they would be moving the zoo as far back as 2018, per the local network Oklahoma's News 4, which cited a Facebook post the new owner had written. "We think it's best to let this zoo, die [sic] with Joe's conviction and not make the next generation of animals to live here, forever suffer his outrageous behavior and reputation," Lowe reportedly posted. His wife, Lauren, echoed these sentiments in an interview with KOCO after Joe's sentencing in January 2020. "[Joe's] name will not be mentioned," she said. "He will have nothing to do with the new facility. Going to let this place in Wynnewood, Oklahoma, die with him."

Indeed, the Greater Wynnewood Animal Park's social media presence has been all but scrubbed of associations with Joe, save for occasional posts distancing themselves from him. Per the same News 4 article, Lowe wrote that their newly relocated zoo would be open by spring of 2019, but as of Dec. 5, 2019, it was still under construction.

They've started a new website for their new location, which claims that they're having a grand opening this summer (it's unclear if they will still make that goal, due to COVID-19 concerns, but on Dec. 5, 2019, they'd finished setting up the new zoo's perimeter). In the meantime, the Greater Wynnewood Zoo is still open for business, but it's worth noting that they still allow cub petting, which Joe's adversary, Carole Baskin, vehemently opposes.

Furthermore, the park is still open normal hours, despite the coronavirus. Bustle reached out to inquire whether they were open to the public as usual, and the zoo confirmed that they are, adding that they're located "in a rural area. For people to visit they can still practice their 'social distancing' while enjoying spending time being out doors." (As of the time of publishing, there were currently 81 positive COVID-19 cases in Oklahoma, per Oklahoma's News 4.)

However, Lowe and his wife Lauren are adamant that the animals' quality of life has gotten better since the park changed hands. "Since we took over, the zoo has spent thousands upon thousands getting every animal the medical treatment and proper diets that greed robbed them of," the organization's Facebook page posted on March 11. "We defy anyone to find a mistreated or neglected animal here. We are one of the few zoo owners in America with a spotless USDA history."

One of the Tiger King producers, Eric Goode, however, has another opinion, telling Entertainment Weekly that Lowe is "basically operating on fumes," due to less business. Goode continued, saying, "I think that it's very sad what's happening to these animals. And it's anyone's guess as to what's going to happen to them. Some will be placed but I would suspect a lot of them will die from starvation, and probably be put down." Bustle's request for comment from the zoo regarding the situation was not immediately returned.

Either way, the differences of opinions show that Joe Exotic's zoo, even if it's not technically his anymore, remains controversial while continuing to draw visitors.