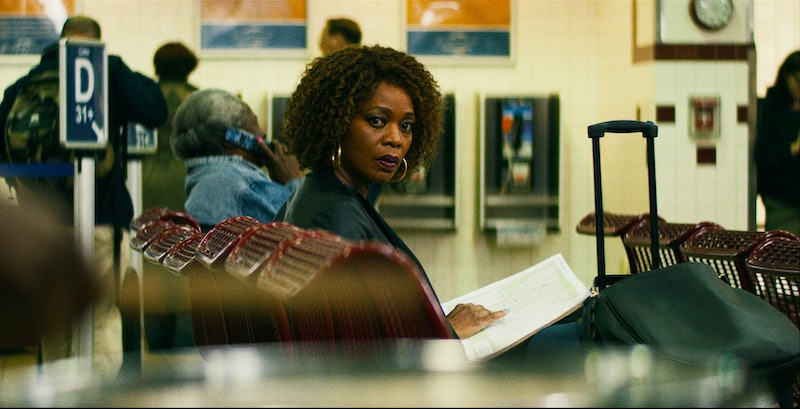 The premise of Netflix's new film Juanita (debuting Mar. 8) is something so many people daydream of living. A woman (in this case, a middle-aged single black woman with three adult children played by Alfre Woodard) is frustrated with her exhausting and thankless existence taking care of everyone but herself and decides to buy a one-way ticket to get out of town (in Juanita, that's the fictional Paper Moon, Montana). With a tagline so relatable — "You can't find yourself if you never get lost" — viewers will surely wonder if Juanita is based on a true story.

The movie is actually based on a novel from Columbus-born author Sheila Williams, who says her book (Dancing on the Edge of the Roof) was born out of a scenario she experienced, but nothing else about her life.

“I started the book when I was on a day that all of us had where everything that can go south does,” Williams told Associated Press last April. She relayed that she had ironing to do, the car needed gas, and her workplace was undergoing a reorganizing. She called her husband to ask for help, requesting he pick up their youngest from daycare. “He said ‘When will you be home?’" she told AP. "I said, ‘Oh about two or three months.’”

But instead of taking off for Montana, Williams (who has lived in Newport, Kentucky since 1999) was inspired to write Dancing on the Edge of the Roof, her debut novel that published in 2002 and was adapted by Woodard's husband, Roderick Spencer. (Netflix purchased the rights in 2017, per Cincinatti.com.) As the titular Juanita, Woodard leaves her children, grandchildren, and job as a nurse's aid behind to settle in a remote small town where she befriends the locals and starts cooking at Chez Paper Moon, becoming an instant celebrity for both her way with food — and the fact she's the only black person for miles in a largely Lakota Native American and otherwise white rural area.

Directed by Clark Johnson (Homeland, Luke Cage), Juanita was largely shot in Virginia, according to the Richmond Times-Dispatch, including Petersburg, where Woodard's co-star Blair Underwood is from. In the book, Juanita loses herself in romance novels, but in the film, Blair Underwood plays a shirtless version of himself as the manifestation of her dream man — at least most of the time.

Some of Dancing on the Edge of the Roof's eccentric characters make it into the Netflix adaptation, including Peaches, the helpful lesbian truck driver, played by BlacKkKlansman's Ashlie Atkinson. Then there's Jess (Adam Beach), the chef at Chez Paper Moon with whom Juanita has an unexpected romance.

It's not completely unfamiliar territory — comparisons to How Stella Got Her Groove Back aren't too far off, but Juanita isn't based on a true story like Terry McMillan's novel-turned-feature film starring Angela Bassett and Taye Diggs. McMillan based her best seller on a post-divorce trip she took to Jamaica where she ultimately met a local, who was handsome, half her age, and provided her with the inspiration she needed to catapult her career, per SFGate.com. Unfortunately, that love story infamously ended with McMillan suing her now ex-husband for $40 million, claiming that he lied about her sexual orientation and married her to become a U.S. citizen.

Movies about women over the age of 40 having a mid-life crisis is certainly a popular enough genre, but it's still rare that these films are based on and starring a woman of color, and even rarer that they are not centered on her finding love. Instead, Juanita is about its main character finding herself apart from what she's able to do for everyone else around her, a journey which continues in Williams' 2005 sequel, On The Right Side of a Dream. But those who who prefer to watch Woodard will be satisfied with her ending, and possibly even inspired to live out their own upheaval in attempt to find a blissful overhaul.