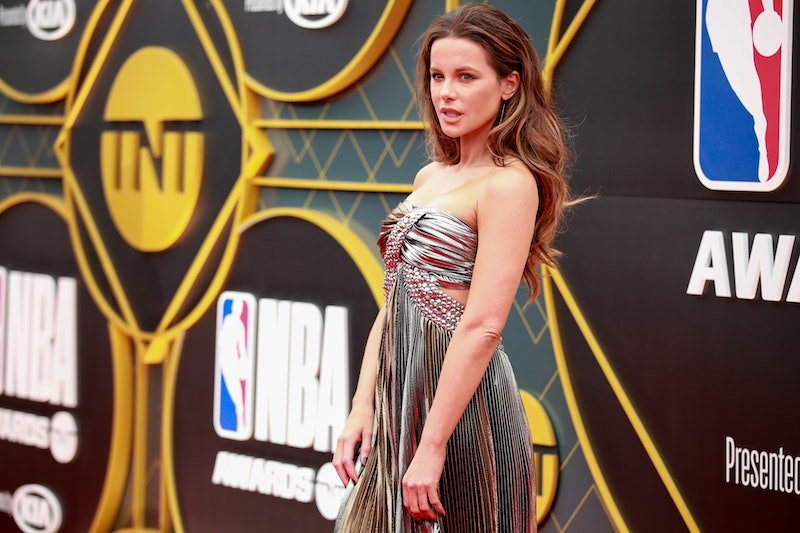 The bob isn't merely having a moment. It's not simply having a season, either. The bob is having an entire year. Actor Kate Beckinsale just got a blonde bob and she is the latest celebrity to dramatically ditch her long hair in favor of the classic cut. Celebrities from Kim Kardashian West to January Jones to Mandy Moore to Reese Witherspoon have all gotten variations of the bob, proving that 2019 is indeed the year of the bob.

Beckinsale didn't just get a short bob, though. She also dyed her normally brown hair a bright, golden blonde hue. Beckinsale has long been known for her tumble of chestnut brown waves and curls. So this was a drastic and dramatic change of both her cut and color. It appears to be the lightest and shortest she has ever gone with her strands at the same time. The actor has been blonde here and there. She also rocked a no nonsense bob in Brokedown Palace, the 1999-released film in which she and Claire Danes played two Americans imprisoned abroad.

Beckinsale posted several images on her personal Instagram feed over the past week, proudly showing off her new ‘do. She was her signature long and brunette one day and short and blonde the next. You can't quite tell for sure if her sassy style is the real deal or if it's the work of a wig.

Refinery 29 reports that the Beckinsale swapped out her signature brunette shade and style in favor of a blonde lob for her role in the forthcoming film Jolt. Her blonde bob is essentially a highly textured lob thanks to all those shaggy layers. Seriously, this lob has so much texture. It looks incredibly touchable despite having such definition when it comes to those waves. Beckinsale's hair also hangs past her chin to her collar bone and boasts tons of choppy movement. In all the pictures she has shared thus far, Beckinsale is rocking killer beachy waves.

It's a totally punk rock look for Beckinsale — and it's one fans haven't seen from her before. In this shot, with her over-the-elbow black gloves, cranberry colored slip dress, smudgy, smoky eyes, and pastel pink lips, Beckinsale channels '90s era Courtney Love and '80s icon Debbie Harry. She looks like a consummate rocker and roller in this shot. Her blonde bob has so much energy.

Beckinsale's glam squad attended to her short blonde strands in this shot. She slays the same piecey waves but the soft side part gives it a fancier vibe. Take a closer look at the ends in this shot and this cut does indeed look like the real thing. It also looks really good. It's possible that her style team did execute a quick triple process on her locks at some point. Regardless, Beckinsale clearly likes this pitstop at bright blonde since she keeps posting selfies.

Here's Beckinsale and her usual mega mane — lots of length, body, and volume, along with caramel highlights. You can truly appreciate how just how dramatic the change is.

It's anyone's guess if Beckinsale will return to her flowing brunette locks when she is done with the gig or if she will commit to this shorter shape and lighter shade for the long-term. Anything is possible. Regardless, it was fun to see her make such a dramatic change that fans aren't used to.