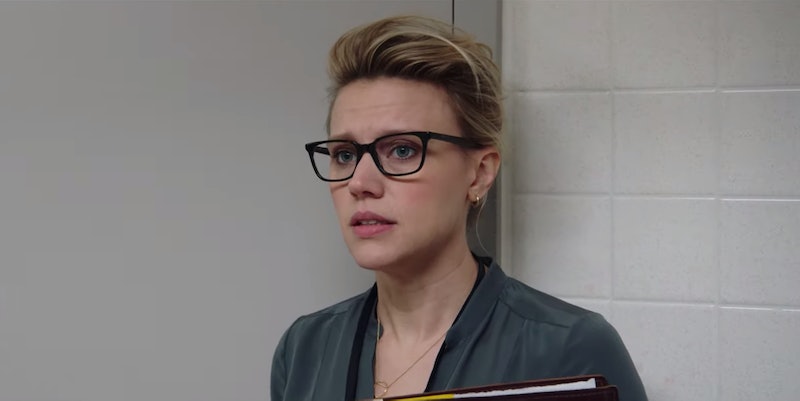 At the center of Bombshell (opening Dec. 20) are Gretchen Carlson (Nicole Kidman), Megyn Kelly (Charlize Theron), and Kayla Pospisil (Margot Robbie), all news anchors or producers at Fox News during the time of the film. And while each offers something for audiences to latch on to, one other character in particular might prove resonant to some of the more liberal-minded audience members: Jess Carr (Kate McKinnon), who McKinnon described to FabTV as a "closet liberal and closet gay woman" who just so happens to work at Fox News, a highly right-wing, conservative news outlet. It's an odd position, and even though Jess Carr isn't based on a real person, she is drawn from and inspired by the first hand accounts of women who worked at Fox News.

Carlson and Kelly are some of the more well-known names attached to the lawsuit at the heart of Bombshell, which saw Carlson accusing then-CEO and chairman of Fox News Roger Ailes of sexual harassment. The movie focuses on their stories, but also manages to pull in stories from plenty of other women working at Fox News at the time who came forward to share their stories regarding sexual harassment. But because of the nature of the lawsuit against the company, those women had to share their stories anonymously with the filmmakers. And, since their identities couldn't be used on-screen exactly, their stories came together to inform both Pospisil and Carr, two fictional characters created for the film.

Like Pospisil, Carr isn't based on any single person in particular. In the film, she's a producer for Bill O'Reilly, who stands in contrast to her as she's a very religious Christian influencer working with the network, whereas Carr is a closeted liberal lesbian at work. The Deadline casting announcement for McKinnon says Carr isn't based on a real person, and that's especially important to note, especially because again, Bombshell is packed full of characters pulled from real life. Carlson, Kelly, and Ailes are all based on their real life counterparts, though none of them were able to participate in the creation of the film. Ailes passed away in 2017, months after stepping down as CEO and chairman of Fox News directly after the lawsuit broke. In Carlson and Kelly's cases, the lawsuit prevented them from participating.

But Pospisil and Carr, two fictionalized characters created solely for the film, serve a specific function: their character arcs are an amalgamation of stories from the anonymous women who stepped forward to join Carlson in her lawsuit. In a chat with FabTV, McKinnon alludes to her character being inspired by first hand accounts when, in describing her character as a "closet liberal and closet gay woman," she said, "Because according to first hand accounts, it's not — you wouldn't want to be open about being either one of those at Fox News."

Despite being in the closet at work, Carr's queerness proves to be one of the more interesting points in the film, at least according to Forbes' review. It mentions that the two fictional characters, Pospisil and Carr, have a brief romantic relationship, and that it "offers some of the best material in the picture." In time, audiences will get a chance to decide for themselves just what kind of impact McKinnon's character will make on the film.

More like this
Your Guide To Watching 'Everything Everywhere All At Once' In The UK
By El Hunt and Sophie McEvoy
Alicia Silverstone Revives Her 'Clueless' Character In This Super Bowl Commercial
By Jake Viswanath
Gerard Butler Insisted On Adding This Pivotal Scene To 'Plane'
By Catharina Cheung
Jemima Khan Used Her Own Life As Inspo For 'What’s Love Got To Do With It?'
By Darshita Goyal
Get Even More From Bustle — Sign Up For The Newsletter
From hair trends to relationship advice, our daily newsletter has everything you need to sound like a person who’s on TikTok, even if you aren’t.