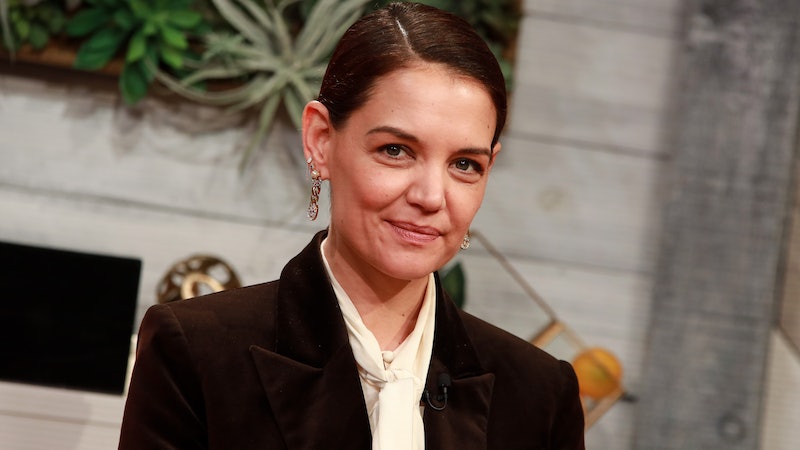 Katie Holmes has been making headlines for incredible style. She has the ability to mix prints, rock a statement sleeve, and turn a cashmere bra into a must-have item. But with all the news on her clothes, there's been less on her love life. So fans might be wondering, is Holmes dating anyone in 2020?

Holmes reportedly only recently got out of a six-year relationship with actor Jamie Foxx. The ultra-private couple was initially rumored to be together as early as 2013 after being spotted dancing together in the Hamptons, and were seen on a yachting trip with their respective kids as late as 2018, but their representatives never confirmed any inquiries into their relationship, and the couple themselves remained silent on the matter. The last time the two were officially seen together was on May 6, 2019 at the Met Gala, but in October 2019, Foxx was spotted holding hands with singer Sela Vave.

Though Holmes hasn't been linked to anyone specific, the actor was spotted with a younger mystery man at Milan Fashion Week in September 2019. However, there's been no further word on who he might be, and there have been no further sightings.

Instead, the actor has been focusing on her career. The year 2019 was quieter for Holmes, who appeared in just one film, Coda. But in 2020, we'll see much more of Holmes on the big screen. Starting with Brahms: The Boy 2. In the film, Holmes plays a paranoid mother of a disturbed young child, who befriends a terrifying porcelain doll.

Holmes also recently completed two as-yet aired TV movies, and has The Secret: Dare To Dream coming out later this year, along with an as-yet unannounced second directorial project. The film, called Rare Objects, is a coming-of-age story about a young daughter of Irish immigrants figuring out her own identity in Manhattan. The actor has a busy year ahead of her, full of buzzy films and exciting new projects.