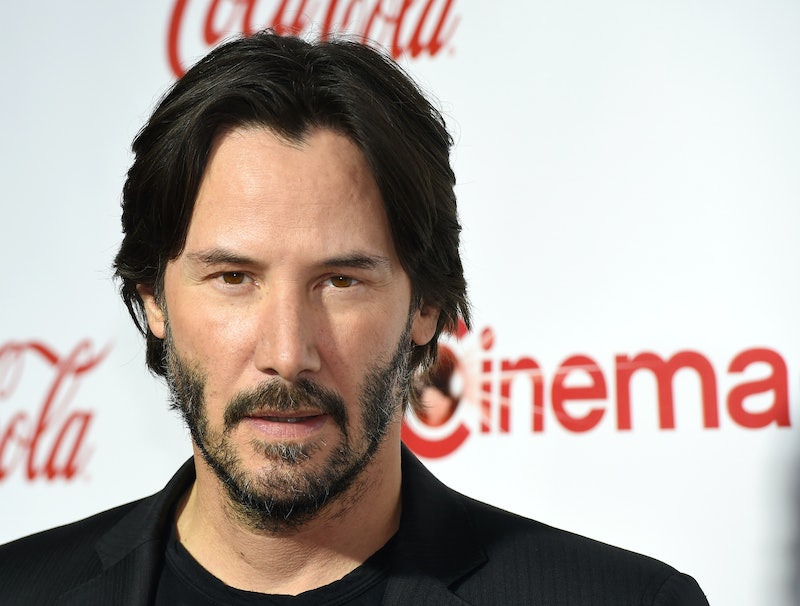 The internet has a new boyfriend these days, but it's not the first time he's made people swoon. He's basically been crush-worthy since Bill & Ted's Excellent Adventure — which came out in 1989, by the way — but might be more so now than ever. So, is Keanu Reeves single, you wonder? The self-described loner has long-been notoriously private about his personal life, but he did open up about love a little bit during a recent interview.

Back in May, the John Wick: Chapter 3 — Parabellum star spoke with Malaysia’s Star2.com. They covered his affinity for motorcycles, his character Neo in The Matrix, and the John Wick franchise's surprising success. Then the outlet outright asked him, "What does love mean to you?"

Huh. Kind of a tough question, right? Love is so abstract and multi-faceted. For any given person, "love" could mean like, a thousand different things. Reeves didn't shy away from responding, though, and explained,

"You mean romantic love? You know, I’m the lonely guy. I don’t have anyone in my life. But if it does occur, I would respect and love the other person; hopefully it’ll happen for me."

Aww. That might just be the saddest and sweetest thing that has ever been said. Hey, there's no need to be "the lonely guy" anymore, Keanu. We're here for you. All of us. The entire collective internet. Just waiting for you to respect and love us.

So, yeah. Based on what Reeves told Star2.com, he is, in fact, single at the moment. However, if and when he does fall in love, don't expect him to shout it from the rooftops. Over the course of his 30-plus years in Hollywood, he's been incredibly tight-lipped on the romance front. Like, super tight-lipped. Like, you'd be hard-pressed to find a single instance where he's mentioned dating anyone in particular.

Now, Reeves has definitely been spotted out and about with the occasional lady-friend from time to time. He reportedly dated Sofia Coppola in 1992, after her father, Francis Ford Coppola, directed him in Dracula, according to Entertainment Tonight. Neither he nor Coppola have ever confirmed that, though.

Reeves was also said to have been involved with Jennifer Syme for several years between the late '90s to the early '00s. Sadly, their relationship couldn't sustain the loss of their stillborn child, Ava, in January 2000, but they seemingly continued to remain close friends up until Syme was tragically killed in a car crash the following year, as per People.

There have been a few other whispers and rumors in regards to who else Reeves has dated, but again, nothing has ever really gotten confirmed. He did, however, recently admit to having had a crush on Sandra Bullock while they were filming Speed — 25 years after the fact. Oh, what could have been. (Bullock has been dating photographer Bryan Randall since 2015.)

At the end of the day, Reeves doesn't owe anyone any details about his personal life. He deserves to be able to keep that private if he wants. Once he's really ready for love, though, there certainly won't be a shortage of lovely ladies patiently waiting in line.

More like this
At 28, Lesley Manville Was Acting, Picketing, & Singing Kate Bush Songs
By Olivia-Anne Cleary
Brad Pitt’s Recent Dating History Includes A German Model
By Brad Witter
Nicholas Hoult Has The Sweetest Things To Say About His Family
By Sam Ramsden
Kourtney Kardashian Shares New Photos From Her & Travis' Courthouse Wedding
By Bustle Editors
Get Even More From Bustle — Sign Up For The Newsletter