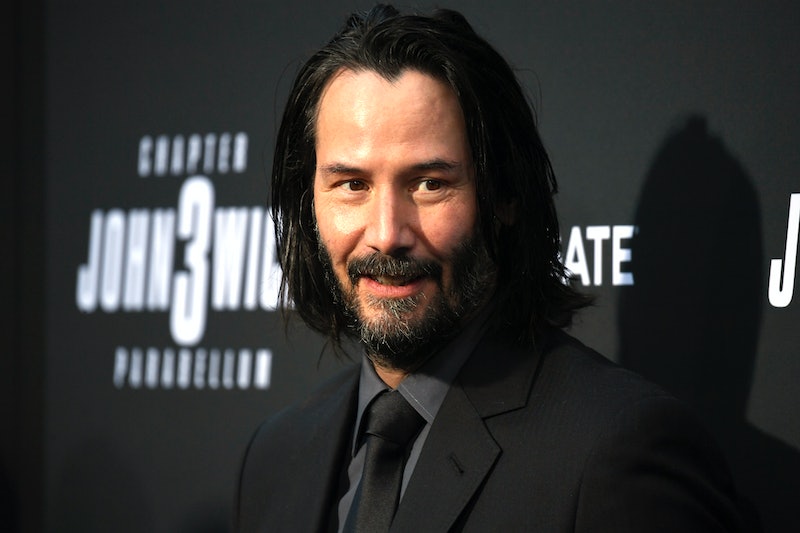 Imagine what could have been. Sigh. During an appearance on The Ellen DeGeneres Show on May 17 (as reported by Entertainment Tonight), Keanu Reeves admitted he had a crush on Sandra Bullock while they were filming Speed. Yep, you read that correctly. Jack had a thing for Annie in real life. And it only took him two-and-a-half decades to finally admit it.

Reeves stopped by to speak with DeGeneres about his new film, John Wick: Chapter 3 — Parabellum, and it turns out that it was the first time they'd met. They spent a few minutes bantering about how on earth they've never crossed paths in all their combined years in entertainment, after which DeGeneres joked that, "The way we should have met ... Speed was originally written for me. Did you know that?" she asked Reeves.

Reeves laughed and said it would have been "cool" and "nice." Agreed. DeGeneres then told him that she'd put together a clip to show what would have looked like if she'd been in Speed instead of Bullock, and let's just say that it did not end well.

"So, Sandra Bullock, that was her first big break with you," DeGeneres said to Reeves of Bullock's co-starring role in the 1994 film. "And I asked her — because everybody had a crush on you — if she had a crush on you then, and this is what she said."

The host then rolled a clip of an interview she'd done with Bullock in December 2018, where said that Reeves was so "sweet" and "handsome" while they were filming Speed. "It was hard for me to really be serious," Bullock continued. "He would look at me and I'd be like, [giggles]."

Shortly thereafter, DeGeneres asked her, "Did y'all get together?" to which Bullock replied, "Never dated him. I guess there was just something about me he didn't like." Aww, poor Sandy.

Reeves clearly got a kick out of watching Bullock's admission, and was definitely blushing a little bit when the camera cut back to him. "Did you know she had a crush on you?" Degeneres inquired. Reeves shook his head and said, "No, she obviously didn't know that I had a crush on her either," which caused the audience to erupt with "ooos" and "ahhs." Juicy, right?

"I can't believe you both had crushes on each other and you were so scared," the host told him. "We were working," Reeves responded. "So that chemistry [on-screen] was real, because y'all both did have feelings like that," DeGeneres said. "Yeah, it was nice to go to work," the star grinned. "She's such a wonderful person, a wonderful actress."

Sadly, Bullock has been dating photographer Bryan Randall since 2015, so Reeves missed his chance. It's unclear whether or not he's seeing anyone himself these days, but man, why did both of them wait more than twenty years to admit their crushes? Oh well. Maybe one day the stars will align for the two actors. Or maybe they won't, and they'll just continue to be good friends, which is totally cool too.