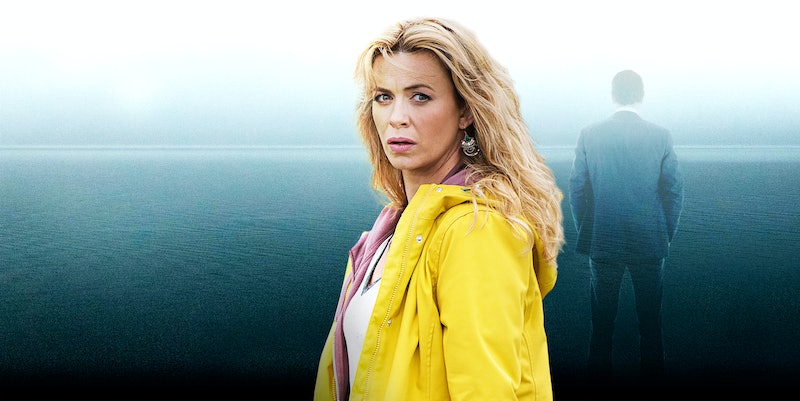 Not quite content with just taking the BBC iPlayer by storm, Welsh noir drama Keeping Faith is now coming for a prime time slot on BBC One. The eight-part series stars Broadchurch actress Eve Myles as Welsh lawyer Faith Howell, a wife and mother drawn into a mystery when her husband and business partner Evan (Bradley Freegard) disappears after a party in their small town. So, is Keeping Faith based on a true story? And, what is Keeping Faith actually about?

Well, no. Keeping Faith is a fictionalised series created by novelist and BAFTA-nominated screenwriter Matthew Hall, who came up with the idea as one of two he pitched after being asked to create a thriller series by S4C producer Pip Broughton, who actually commissioned Keeping Faith five years before its 2017 debut, back in 2012.

Nonetheless, Keeping Faith is inspired by a real life place and it also stars a real life couple.

As Hall explained to the Chepstow Beacon in April, Keeping Faith was inspired by the real Welsh historic county town of Monmouth, where Hall lived for a period of time. Hall said: “Having lived in Monmouthshire and Herefordshire most of my life I had always wanted to write a series based in a small community in which everyone knows everyone else – which we all know is a blessing but sometimes has its drawbacks."

He added: "I also wanted to portray modern Wales and to showcase its beauty. Pip has caught this beautifully in her direction and the landscape imagery has captured the imagination of the audience beyond Wales. We are very proud of the fact that this is a show that was born in and inspired by Monmouth.”

So the setting may be based on a real town, but what else is real?

Well, the onscreen relationship between Faith and her missing husband Evan in the BBC Drama may be a figment of Hall's imagination, but the IRL marriage between Eve Myles and her Keeping Faith co-star Bradley Freegard offscreen is entirely real.

Ahead of Keeping Faith's primetime BBC One England debut, Myles appeared on ITV's This Morning on Wednesday where she explained what it was like playing the onscreen spouse of her real life husband, Freegard, who The Sun reports she married in Italy in 2013. She said: "It's the first time we've played husband and wife. We've played brother and sister...so I'm pleased to be playing his wife this time around."

Myles also told What's On TV that filming marital scenes with her IRL hubby on Keeping Faith was just a little "bit weird." She said: “It was a bit weird kissing him on set. It’s also strange when you’ve been searching for Evan all day while filming and then you come home and he’s just sitting there with his feet up and a cup of tea!”

So, is the very real chemistry between Myles and Freegard the reason why is Keeping Faith so darn popular?

While it will remains a mystery to many until they watch it on Thursday evening, there's certainly no denying Keeping Faith's success, as the unlikely breakout series has gone on to smash all kinds of viewing records.

Keeping Faith first aired S4C as Un Bore Mercher and after averaging 300,000 viewers per episode, was bumped up and aired on BBC One Wales. Following that, all eight episodes of Keeping Faith were made available to watch on BBC iPlayer and viewed more than 9.5 million times, thus meaning Keeping Faith broke the record for the most viewed "non-network" show on the service.

Now, let's just see how it does on BBC One.

Keeping Faith airs at 9 p.m. on Thursday on BBC One